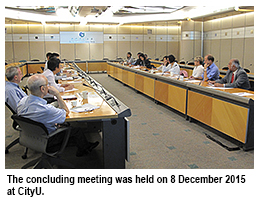 City University of Hong Kong (CityU) has completed its role as convenor in 2015 for the Hong Kong Sustainable Campus Consortium.
The concluding meeting was held on 8 December 2015.
The Consortium was established in 2010 by the Heads of Universities Committee (HUCOM) as a platform for higher education institutions in Hong Kong to share information and best practices on sustainability issues.
The convenorship is rotated among member universities on a yearly basis.
Professor Linda Li Che-lan, Associate Provost (Strategic Planning), served as the Consortium’s Convenor on behalf of CityU throughout 2015. The Consortium held numerous working meetings during the year, including four full official meetings, at CityU.
CityU’s dedicated support to the Consortium demonstrates its commitment to promoting and enhancing sustainability in the education sector, as well as in the wider community.
Under CityU’s leadership, the Consortium formulated a Sustainable Purchasing Framework in 2015 to promote green purchasing in the higher education sector.
To better inform the community about the sector’s sustainability performance, the Consortium revamped its website, enhanced its annual reporting framework and agreed to publish its annual report on the Consortium’s website.
Engagement activities were also organised during the year, such as the China Green Building Forum in June at which CityU shared its effective sustainable campus operations with participants; and the Hong Kong Tertiary Schools COP21 Challenge co-organised with the Consulate General of France in Hong Kong and Macau in the fall of 2015 in response to the 2015 UN Climate Change Conference (COP21).
Acting Secretary for the Environment Dr Christine Loh Kung-wai, JP, visited the Consortium at CityU on 8 December with Assistant Director (Nature Conservation & Infrastructure Planning) Mr Elvis Au Wai-kwong, JP, and Political Assistant to the Secretary for the Environment Ms Michelle Au Wing-tsz.
Mr Sunny Lee Wai-kwong, CityU’s Vice-President (Administration), and Mr Landy Hung Tung-ming, Associate Director of CityU’s Campus Development and Facilities, joined the 8 December meeting to exchange ideas on campus sustainability with Consortium members and the government delegation.