In the latest talk in the President’s Lecture Series: Excellence in Academia, Professor Michael Yang Mengsu of the Department of Biomedical Sciences (BMS) at City University of Hong Kong (CityU) discussed the history of DNA and biotechnology, DNA chips for cancer screening, tumours on a chip, and nanomedicine for cancer treatment. 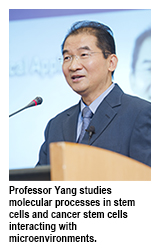 He concluded that the era of precision and personalised healthcare is not a pipedream and would be upon us soon.
“Precision medicine is the third wave of biotechnology,” said Professor Yang, Head of BMS, Yeung Kin Man Chair Professor of Biomedical Sciences and Director of the CityU Shenzhen Biotech and Health Centre.
Precise and personal information were especially important for the early detection and effective treatment of cancer, and had been made more possible than at any point in human history through studying gene expression profiling and empirical work in clinical applications.
“Our work over the last 20 years has been characterised by a transition from lab research to clinical trials."
Professor Yang said that precision medicine was particularly effective in combating conditions such as cervical cancer, a disease that was 100% curable if detected early. Cervical cancer is the second most common cancer affecting women, and every year 500,000 women are diagnosed with it. 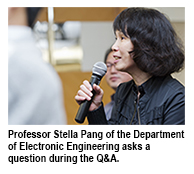 However, using DNA chips for detecting the human papillomavirus (HPV), which is strongly correlated with cervical cancer, Professor Yang and his team were able to identify 29 HPV subtypes (including 13 confirmed high-risk HPV and 6 common low-risk HPV).
The natural development of the team’s work was the creation of Genetel Pharmaceuticals, co-founded with CityU Enterprises in 2004, and a listed company since 2009.
Other areas of work include pharmacogenomics, which is the study of how genes affect an individual’s response to medications, the migration of cancer cells (metastasis) under different microenvironments, cell invasion, and the targeted destruction of cancer stem cells by nanomedicine.
“Through our work thousands of lives are saved every year!” Professor Yang said.