Tolerance for a better world 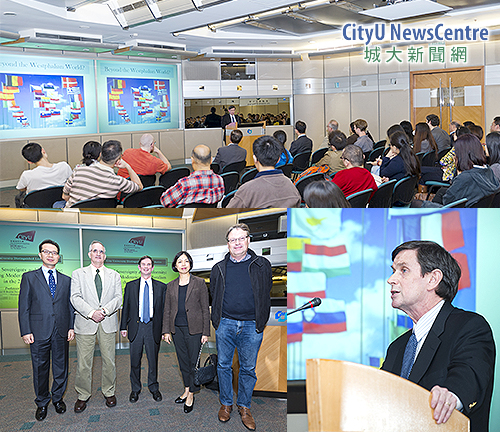 World leaders should tolerate different religions, cultures and ethnicities within their boundaries while at the same time opening their arms to immigration, according to a renowned political scientist at a lecture at City University of Hong Kong (CityU) on 14 December.
The best way individuals and their communities can use their power is to aid others without doing harm to themselves, said Professor Rogers Smith, Associate Dean for Social Sciences of the University of Pennsylvania at the latest installment of the CityU Distinguished Lectures Series.
The lecture was titled “Beyond Sovereignty and Uniformity: Pursuing Moderation and Pluralism in the 21st Century”.
During the 19th and especially the 20th century, political communities were organised as sovereign nation-states with citizens who were all offi­cially equal. But in the 21st century, there is increasing pressure to recognise the legitimate existence of many forms of political identity including indigenous peoples, religious and ethnic communities, and autonomous regions, with different rights and laws.
Professor Smith argued that the Westphalian system has led to massive economic inequalities, severe democratic deficits and obstacles to personal self-realisation. Therefore, he suggested that citizens must press leaders to identify and defend the consequences of their policies for the world and subject leaders’ claims that diversity cannot be accommodated to strict scrutiny.
Professor Smith is the Christopher H. Browne Distinguished Professor of Political Science at the University of Pennsylvania. His publications include Political Peoplehood (2015) and Civic Ideals: Conflicting Visions of Citizenship in U.S. History (1997). The latter was a finalist for the 1998 Pulitzer Prize for History.