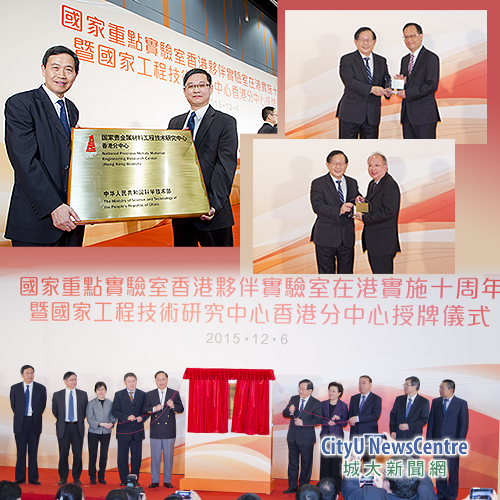 A special ceremony to celebrate the 10th anniversary of the establishment of partner State Key Laboratories in Hong Kong and for awarding special plaques to Hong Kong branches of the Chinese National Engineering Research Centres was held at Hong Kong Science Park on 6 December.

At the ceremony, the Hong Kong Branch of National Precious Metals Material Engineering Research Centre (the Centre) recently set up at City University of Hong Kong (CityU) received a plaque from the Ministry of Science and Technology (MOST) of the People’s Republic of China.

The ceremony was officiated by Professor Wan Gang, Vice-Chairman of the National Committee of the Chinese People’s Political Consultative Conference and Minister of Science and Technology of the Central People’s Government; Ms Qiu Hong, Deputy Director of the Liaison Office of the Central People’s Government in the Hong Kong Special Administrative Region; and Mr Nicholas Yang Wei-hsiung, Secretary for Innovation and Technology.

Five Hong Kong branches were established at CityU and other two local universities this year.

Professor Lu Jian, Director of the Centre and Vice-President (Research and Technology) of CityU, and Mr Qian Lin, Director of Kunming Institute of Precious Metals, attended the ceremony and accepted the plaque on behalf of CityU.