​
Forty-eight student volunteers from the Department of Public Policy (POL) experienced politics in action when they worked for various political parties and candidates during the District Council (DC) elections on 22 November 2015. 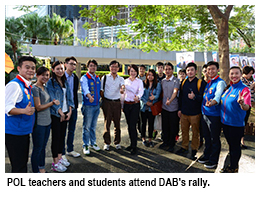 Cheung Kai-wa, a Year 3 POL student living in Tiu Keng Leng, is concerned about issues in his local community. “After I worked with the independent candidate Christine Fong on her campaign, I realised local politics involves more stakeholders than I thought,” Kai-wa said.
Another POL student Chan Ling volunteered to help a Democratic Party (DP) candidate in Shek Lei for re-election. The candidate lost by 54 votes to a pro-establishment challenger.
“The pan-democrats could mobilise resources within the district, but the pro-establishment side could gather a lot of outside support,” Ling said.
Napoleon Lau Ka-wai, a Year 4 POL student, also noticed significant differences in the elections.

“A candidate from the Democratic Alliance for the Betterment and Progress of Hong Kong (DAB) told me that people vote for the candidate in DC elections, but they vote for the party in the Legco elections,” he said.
The students were taking part in a series of out-of-classroom learning activities called GO DEEP (Discovering and Experiencing Election in Practice) organised by POL.
GO DEEP, which aligns with the core philosophy of CityU’s Discovery-enriched Curriculum, enabled students to observe campaigns during the 2015 DC elections.
“I learned a lot from GO DEEP,” said Isaac Pang Yuen-for, a Year 2 POL student who followed the DP heavyweight candidate the Hon Albert Ho Chun-yan in Tuen Mun. “I look forward to another round of GO DEEP activities for the 2016 Legco elections.”