Let there be light

Light plays a vital role in our daily lives, according to the speaker at the France-Hong Kong Distinguished Lecture Series on 18 November. 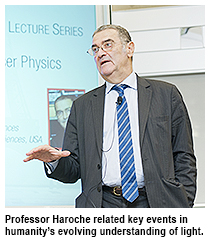 It has revolutionised medicine, communication via the internet, and plays a central role in culture all around the world, said Professor Serge Haroche of the French Academy of Sciences in his talk.
In fact, 2015 was designated the International Year of Light and Light-based Technologies, Professor Haroche reminded the audience.
But the attacks in Paris just days before had cast a shadow.
“I had planned to talk about the revolutions in laser physics over the last 50 years but instead I would like to talk in general about the relationship between light and human civilisation, about the discoveries we have made, about the Enlightenment, about how essential light is to life,” said Professor Haroche, who won the Nobel Prize in Physics in 2012 for his work in quantum physics.

His work relates specifically to the interactions between light and matter, especially sub-atomic matter, which has opened the door for a new era of experimentation in quantum mechanics.
The core part of his talk focused on such luminaries as Newton, Huyghens, Galileo, Faraday, Maxwell and Einstein, among others. He talked about how humans had explained light in terms of myth, religion and philosophy until the seventeenth century when reason and science reframed light with telescopes and microscopes, revealing fresh perspectives and new microscopic worlds.
Professor Haroche referred to breakthroughs in the nineteenth and twentieth centuries in measuring light, its velocity, wavelength, oscillation, and its relationship with magnetism and relativity, relating how each scientist had built on the work of those who went before.

His lecture brought us up-to-date with atomic clocks, quantum light and the laser, which would have been the primary focus of this talk had the attacks in Paris not taken place.
“The laser is a fantastic source of coherent, monochromatic and intense radiation that has changed perspectives in many areas, from the extraordinary accurate measurement of time to the study of ultrafast phenomena, from the achievement of the highest temperatures reigning in the hearts of stars to the lowest temperatures in the universe,” he said.
The Age of the Enlightenment, Le siècle des Lumières in French, had not only led humans to a greater understanding of light and matter, Professor Haroche noted, it had also championed freedom of speech and liberty, an irony not lost on the audience as they contemplated during the one minute’s silence before the start of the lecture the tragic events in Paris.