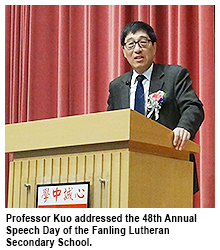 Professor Way Kuo, President of City University of Hong Kong (CityU), encouraged students to pursue innovation for the well-being of humanity when he addressed the 48th Annual Speech Day of the Fanling Lutheran Secondary School on 14 November.
Professor Kuo recalled that there was a war on in Vietnam and tense relations existed between mainland China and Taiwan when he graduated from Taipei Municipal Chien Kuo High School 48 years ago. Now more countries than ever before have become affluent, but the world is still in a volatile place, as reflected in the recent attacks in Paris.
“The world is closely connected now. Deadly diseases like Ebola could affect the health of people all over the world. Therefore, we need to perform our duties, not only for our own benefit but also to make it a better world,” Professor Kuo said. 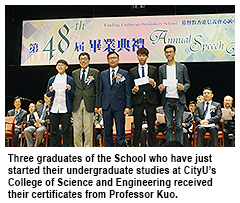 He said Chinese scientist Tu Youyou, winner of this year’s Nobel Prize in Medicine, had invented a new medicine for malaria that had saved millions of lives. “This is the same direction of development for CityU, i.e., pursuing innovation to deal with different issues in the world for the well-being of humanity,” he said.
Professor Kuo said innovation could only contribute to humanity over the long term if we took a broad view of the world. He said that he hoped we could make a concerted effort to build a brighter future for the younger generation.
Three graduates of the Fanling Lutheran Secondary School, Vincent Lung Kei-lok, Chow Wing-tung and Cheng Ho-yuen who have just started their undergraduate studies at CityU’s College of Science and Engineering, received their graduation certificates from Professor Kuo at the ceremony.