Harmonisation of consumer and contract law

Asia can benefit from the work that has been put into consumer protection in the European Union, according to Professor Geraint Howells, Chair Professor of Commercial Law and Dean of School of Law (SLW), at City University of Hong Kong (CityU). 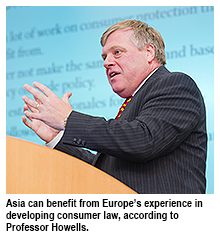 In particular, Asian jurisdictions can avoid mistakes that Europe made such as more recent government-level movements to use trade policy to shape consumer laws, Professor Howells said during his talk on 26 October as part of the President's Lecture Series: Excellence in Academia.
“Europe has elements of a powerful consumer policy that risks being undermined by excessive concern for internal market dimensions,” he said in his talk, which was titled “Harmonisation of consumer and contract law: Any lessons from Europe for Asia?”
Professor Howells said his recent move to CityU from the UK to take over as Chair Professor and Dean in the SLW had provided him with an opportunity to investigate the extent to which his research in Europe during his three decades-long career could apply to an Asian context.
The key points gleaned from the European context include insights that Europe has a “fairly strong law base”, recognition that consumer law affects trade, and that trade gives rise to cross-border problems.
But in Asia the situation was less clear, according to Professor Howells. While there had been significant improvements in consumer rights in China, Japan and South Korea, it had been patchy in some states in Southeast Asia.
“In addition, there are gaps in Hong Kong, for example in terms of product liability and modern sales law,” he said. 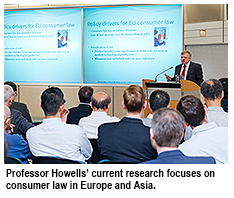 Professor Howells emphasised the importance of consumer law to the state. It can be a driver for improved national competitive standards and for competing against imports or allowing exports.
And with a growing middle-class in Asia seeking better quality goods, and being prepared to travel to acquire them, or import them, harmonisation was feasible.
“It is unlikely that we will see a formal Asian-wide harmonised approach but a focus on developing consumer law would be a mutual learning process and generate more cooperation to assist cross-border consumers,” he said.
A key point, he said, was whether or not consumers in this part of the world would start to demand the same kind of quality that their European counterparts insisted on, and whether or not they would seek to enforce their rights, as their European counterparts do.