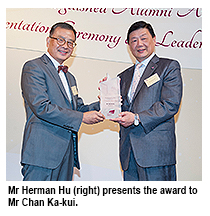 Mr Chan is a highly respected professional in construction and surveying. Having qualified as a quantity surveyor in 1974, Mr Chan spent most of his career as Managing Director of Hsin Chong Construction Group Limited, a very successful property and construction group in Hong Kong and Macau.
Mr Chan obtained his master degree in Arbitration and Dispute Resolution in 2003. “As a CityU graduate, I feel very honoured to have the opportunity to lead a couple of large scale building projects for my alma mater,” Mr Chan said. “The additional space is very helpful to the development of the University.”
CityU had nurtured numerous brilliant graduates for some 30 years, he said, adding that he hoped they would also have the opportunity to serve the University.
In addition to the surveying profession and construction industry, Mr Chan has wide-spread experience in public service, including serving on the CityU Council and its committees from 2009 to 2014. He is currently a CityU Court member and has recently received an Honorary Fellowship from CityU. 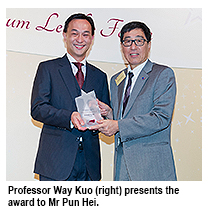 Meanwhile, Mr Pun regularly teaches Constitutional Law and Administrative Law at law schools in Hong Kong and mainland China. He obtained his Bachelor of Laws degree at CityU and was admitted to the Hong Kong Bar in 1995. He was called to the Inner Bar in 2015, at the age of 43, and practices mainly public law. A well-known figure in Hong Kong, Mr Pun was the President of CityU’s 7th Students’ Union, and was awarded a Chevening Postgraduate Scholarship from the UK, which he used for his LLM at King’s College London in 1996.
"The Award is CityU's recognition of my personal career, and it embodies the status of CityU graduates in the community," said Mr Pun, who is an Adjunct Professor of Law at CityU, Adjunct Associate Professor of Law at The University of Hong Kong, and Guest Lecturer at the Peking University and Wuhang University. He is also the founding member of the CityU Eminence Society and a member of the CityU Alumni Ambassador Scheme.
Mr Pun said he hoped CityU would continue to nurture students, regardless of their backgrounds, to understand law and contribute to society.
CityU had received an increasing number of quality nominations for alumni with various backgrounds over the years. And this year marked a record high in the number of nominations.
As Panel Chairman since the launch of the biennial Awards in 2009, Dr Norman Leung Nai-pang, Pro-Chancellor of CityU, said, “it was a very challenging task for the Panel of Judges to select the Best of the Best.”
Mr Hu said at the ceremony that the two recipients of the 4th Distinguished Alumni Award reflected the success of the University’s education provision. “They contribute substantially to their professions, their alma mater and the community at large. They also instill among young people a sense of responsibility and promote selfless contribution to society,” he said. 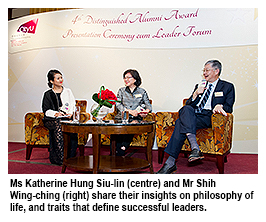 Professor Kuo said the two recipients were role models for our young alumni and students. “I take great pleasure in congratulating the recipients and hope they will continue to support CityU as it moves forward,” he said.
The Leader Forum was held after the presentation. Sharing their insights on leadership were Ms Katherine Hung Siu-lin, Vice Chairman of Chinese Academy of Governance (HK) Industrial and Commercial Professionals Alumni Association Limited, and Mr Shih Wing-ching, Founder of Centaline Group and am730.
The two leaders talked about their success stories, philosophy of life, and traits that define successful leaders.
​​