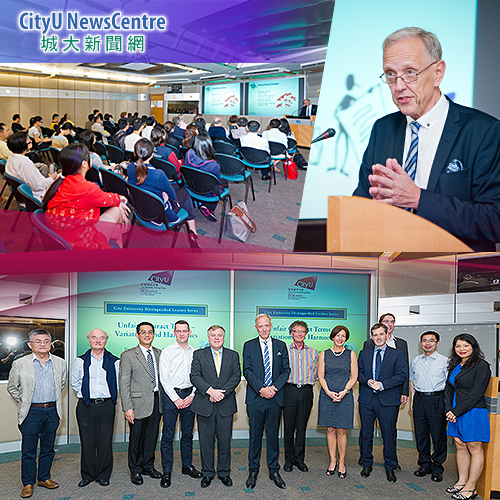 Regulating unfair contract terms and defending the principle of fairness in contract law contribute to transparency of legislation, according to a renowned legal expert at a lecture at City University of Hong Kong (CityU) on 13 October.
Hong Kong’s Unconscionable Contracts Ordinance needed reform to further protect consumers from unfair contract terms, said Professor Thomas Wilhelmsson, Chancellor of the University of Helsinki at the latest installment of the CityU Distinguished Lecture Series titled “Unfair Contract Terms–Variations and Harmonies”.
Professor Wilhelmsson argued that merely seven successful claims brought under the Unconscionable Contracts Ordinance since 1995 showed that this legislative protection was ineffectual. UK’s Unfair Terms in Consumer Contracts Regulations 1999 was a reform model for Hong Kong, he said.
He also discussed European unfair contract terms legislation. Internationally one can distinguish four regulative approaches: (1) no general rule against unfair terms such as the UK, (2) unfair terms regulation relating to standard form contracts such as Germany, (3) unfair terms regulation protecting consumers such as France, and (4) a general rule against unfair terms such as the Nordics.

All these models have traditionally been in use within the European Union (EU). The European Directive on unfair contract terms attempts to combine them with irritating and partially even unexpected effects on national laws. However, the Directive has increased the transparency of the European system.