Young faculty have positioned City University of Hong Kong (CityU) at the top of the Early Career Scheme (ECS) for the fourth consecutive year in terms of both the number and funding amount. 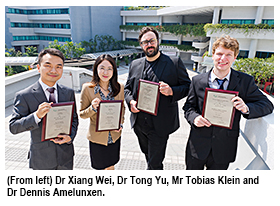 Thirty-five projects in all with close to $20 million in funding were successful in this year’s ECS, which is a Research Grants Council scheme aimed at promoting the work of faculty at the start of their careers.
CityU was ranked 1st in the panel area of Physical Sciences; and also in the subject disciplines of Civil Engineering, Surveying, Building and Construction; Social and Behavioural Sciences; Humanities and Creative Arts; and Mathematics, in terms of the number of grants and amount of funding.
In particular, four members of the CityU faculty, the highest number from an institution, received awards for their outstanding ECS bids with a score of “5”, the highest mark for awarding a project, at a ceremony on 15 October.
The awardees are Dr Dennis Amelunxen and Dr Xiang Wei, both assistant professors in the Department of Mathematics (MA), Mr Tobias Klein, Assistant Professor in the School of Creative Media, and Dr Tong Yu, Assistant Professor in the Department of Information Systems.
Overall, CityU performed strongly in the General Research Fund (GRF) and ECS for 2015-16. The University won 181 grants with total funding worth $101 million, representing an increase of 14% on last year’s awards worth $88.8 million.
Of the 181 successful projects, 112 (62%) were assessed by RGC to be of high quality i.e. ranked “5” or “4.5”.
For GRF and ECS combined, CityU came 1st in the panel area of Business; and also in the subject disciplines of Mechanical, Production and Industrial Engineering; and Chemical Engineering, in terms of the number of grants and amount of funding.
In addition to the success of our younger faculty, senior researchers continue to flourish. Chair Professor Yang Tong and Chair Professor Zhou Dingxuan of MA have added another GRF this year, respectively their 21st and 19th GRFs in a row.