​The President of City University of Hong Kong (CityU) discussed South Korea’s economic and technological advances in his keynote speech at an awards presentation organised by the weekly news magazine Yazhou Zhoukan on 24 September. 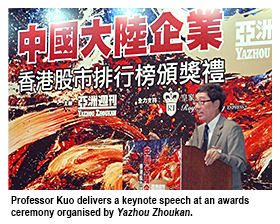 Professor Way Kuo was sharing with a few hundred participants his observations about South Korea picked up over the last 30 years in his talk titled “Opportunities inspired by South Korea’s advancement” at the ceremony for “Mainland Enterprises Listed in Hong Kong Ranking Award (2014-2015)”.

Professor Kuo indicated that Hong Kong should emulate South Korea’s appropriate planning and dedicated effort that have led to its amazing economic advancement.

The benefit of the centralised approach to integrating innovation that South Korean corporations had adopted was continuity and consistency for development.

In 2008, Mr Lee Myung-bak, then President of South Korea, decided to allocate 5% of GDP to technology investment, according to Professor Kuo.

In addition, in 2012, South Korea’s shipping industry claimed third place in the world and its mobile phones acquired the largest market share globally. And when Japan put on hold its plans to develop nuclear power after the Fukushima incident, South Korea took the chance to step into this market and is now determined to become the third largest exporter of nuclear power over the next 20 years, after only the US and France, he added.

However, South Korea has now made tremendous advances while Hong Kong’s technology investment is still less than 1% of its GPD.

South Koreans have even claimed that they want to make Korean cuisine the 5th most popular food in the world!

Similar to the development of its technology, South Korea’s education system got off to a late start, but it has grown rapidly. In addition to Seoul National University, established in 1946, highly rated South Korean higher education institutes include KAIST, formerly Korea Advanced Institute of Science and Technology, he said.

Professor Kuo said that South Korean universities had the highest potential in Asia, and would certainly run neck and neck with their Singaporean counterparts in the future.

South Korea’s success was attributable to its detailed planning, Professor Kuo concluded. As a country that foresaw future trends, South Korea is an inspiring model, he added.