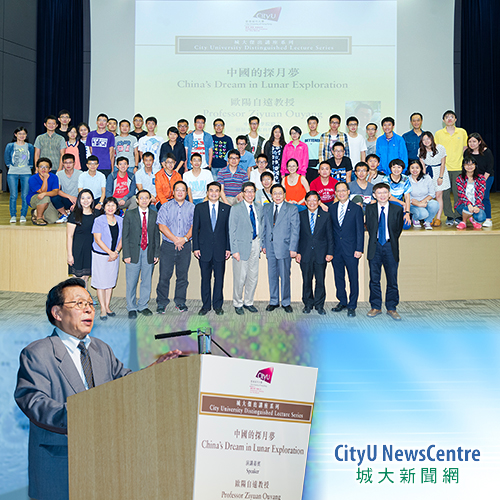 Although Chinese astronauts have not yet flown to the moon, they will do so soon, according to the founding father of China’s lunar exploration programme at a talk for the CityU Distinguished Lecture Series on 24 September.

In his talk, titled “China’s Dream in Lunar Exploration”, Professor Ouyang reviewed the relatively short history of moon exploration conducted by the US and Soviet Union in 1960s and 1970s. He assessed how humans had benefitted from these space projects.

Professor Ouyang, a pioneer in the field of meteorites and cosmochemistry in China, then discussed China’s development strategies and its lunar exploration projects, summarising the missions and scientific achievements of China’s three spacecrafts, namely Chang'e-1 (CE-1), CE-2 and CE-3.

CE-4 was the first-ever spacecraft from Earth to make a soft landing on the far, or dark side of the moon, he said, adding that China’s future lunar plans would involve the findings of CE-5, which is planned to be launched in 2017 to collect lunar samples.

After Professor Ouyang presented China’s initial plans to explore Mars, asteroids and other planets in the Jupiter and solar systems, he stressed the importance of young people working together for the mission of space exploration.

Professor Ouyang is currently working at the Institute of Geochemistry of CAS and is a senior consultant in the National Astronomical Observatories of CAS. Over the past 25 years, he has engaged mainly in developing the short-term goals and long-term plans of China’s exploration programme for the moon and the solar system.