Managing toxins in the environment 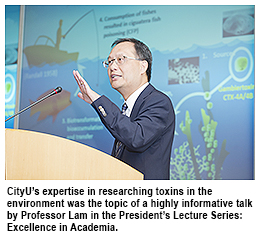 Marine environmental research was the subject of a talk in the on-going President’s Lecture Series: Excellence in Academia on 23 September. The talk, titled “Managing toxins in the environment”, was delivered by Professor Paul Lam Kwan-sing, Chair Professor of Biology, Director of the State Key Laboratory in Marine Pollution and CityU’s Chief-of-Staff (Vice-President).
Professor Lam is particularly interested in the responses of organisms to toxic chemicals and algal toxins, as well as the risk assessment of these compounds.
In his talk he assessed the environmental risk of persistent toxic substances on local wildlife such as dolphins and water birds.
Some of the highlights of his talk involved his revelations of how toxins from chemical compounds otherwise banned in other parts of the world had been detected by his team in the Pearl River Delta, suggesting production was still on-going despite the environmental threats posed by such substances. 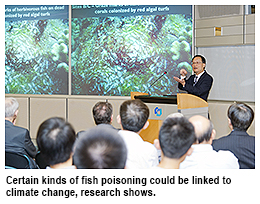 In terms of attitudes to toxins, the key point is managing risk. Carefully handled, many potentially dangerous compounds are relatively safe. The problem is not knowing the origin, use and distribution of potentially hazardous material.
For instance, his research showed that certain perfluorinated compounds (PFC) were finding their way to Polar regions, primarily through water channels.
“The challenge is knowing what is the safe concentration of toxins,” he said.
One of the ways that scientists genuinely know how to approach this dilemma is to get out of the laboratory and into the field, or in this case, into the ocean.
In fact, Professor Lam and his team made a fascinating discovery when diving among coral in the Pacific Ocean around Kiribati. Whereas scientists previously thought the illness ciguatera in humans was caused by eating fish that ate off macroalgae on the coral, the CityU team realised that the fish were actually grazing on the dead coral, too.
If this is the case, we are likely to see more cases of illnesses such as ciguatera because of the greater amount of dead coral found in the seas.
“Global warming and ocean acidification will lead to an increase in ciguatera fish poisoning,” Professor Lam said.