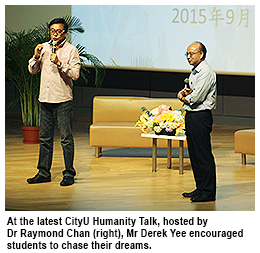 Prominent Hong Kong film director Mr Derek Yee Tung-sing discussed dreams and reality with students at City University of Hong Kong (CityU) at a talk and film screening on 14 September.
Mr Yee, who won Best Director and Best Screenplay awards at the Hong Kong Film Awards for C'est la vie, mon chéri and One Nite in Mongkok, respectively, was speaking at the latest installment of the CityU Humanity Special Series, titled “Who is nobody? Who is somebody? A director’s talk on dreams and reality”.
His latest film I am Somebody, which was screened at the talk, depicts a group of extras working at Hengdian World Studios in Zhejiang Province. Such “crowd actors” are also known as “Heng drifts” because they move from their remote hometowns to Hengdian.
Working in the movies, they struggle between their dreams and reality. 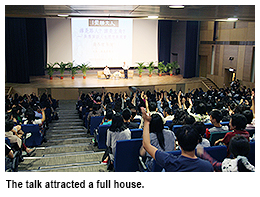 Young people today might experience similar personal conflicts, Mr Yee told the 500 CityU teachers and students attending the event.
“When you encounter a problem, don’t get upset,” said Mr Yee. “Problems are something we all definitely face during our life, so don’t think that you are the most miserable person. The most important thing is that we all have the rights to chase our dreams and to turn the adverse situation around,” he said.
Mr Yee’s refreshing and touching film took two years to make. Many of the scenes and much of the dialogue were improvised by the actors, all of whom the director cast at Hengdian.
Mr Yee has worked with numerous famous performers such as Tony Leung Chiu-wai, Sean Lau Ching-wan, Anita Yuen Wing-yee and Li Bingbing in his previous movies, but he said the “crowd actors” in his new film were very impressive.
“They are very young and not highly educated. In a world that emphasises professional qualifications today, even graduates from the Beijing Film Academy find it difficult to get a job in the movies. It is certainly much tougher for the ‘crowd actors’. But they still work very hard to pursue their dreams,” he said. 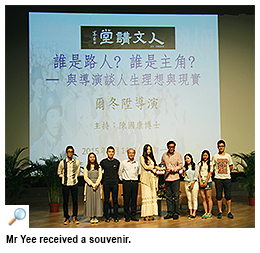 The “crowd actors” in his film come from different backgrounds. For example, Mr Wan Guopeng travelled more than 3,000 kilometres from his hometown in Linkou County, Heilongjiang Province to chase his dreams.
The mainland media nicknamed Mr Wan the “New Mr Bean” after he became famous as a leading actor in one of Mr Yee’s film.
“Perhaps Hong Kong students might not have thought about travelling such a long way to chase a dream, but eventually Mr Wan succeeded. Although he is the only one successful among all the other actors in this film, it is still very encouraging,” Mr Yee said.
As fresh graduates may feel a bit lost when they begin to work in society, Mr Yee suggested them keep an optimistic mind. “You are already halfway on the road to success when you finish your university degree. There are many people who feel lost in various sectors, and you are not the only one. It’s such a big world. We’re all somebody in this world,” he said.
When a student asked what decision should young people make between their dreams and reality, Mr Yee said, “You should choose a job that you like when you are young. You will do a better job if you really like it, and then you can gradually get your rewards. Some people say the ‘Heng drifts’ are just daydreaming about becoming a movie star, but I think they are courageous. They make a bold move to chase their dreams.”
The lecture was co-organised by the Office of the Vice-President (Student Affairs) and the Cultural and Sports Committee, and hosted by Dr Raymond Chan Kwok-hong, Dean of Students.