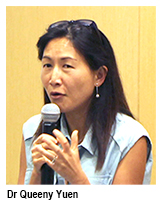 The relationship between humans and animals as well as the welfare of animals were discussed at an alumni forum titled “Be Kind to Animals. Respect Life”. The forum was part of the Happy Hour Gathering Series organised by the Alumni Relations Office at City University of Hong Kong (CityU) on the evening of 31 July.
The guest speaker was Dr Queeny Yuen Wing-han, a Visiting Fellow at CityU’s School of Veterinary Medicine (SVM), and the host of the talk was Mr Eric Lee Ka-chun, a CityU alumnus and a volunteer at Hong Kong Dog Rescue. Dr Yuen, who obtained her PhD degree in Hong Kong after studying animal science in the UK, is currently responsible for research on animal care. Previously, after working as a veterinary assistant, she studied the reproduction of male dolphins at Ocean Park Hong Kong.
Besides alumni, guests attending the activity included Professor Michael Reichel, Acting Dean of SVM, and Dr Neel Aziz and Dr Ng Lip-tet, visiting fellows of SVM.
Despite rising interest in animal rights and greater awareness about the benefits animals bring to life, many Hong Kong people still regard animals as pets and “friends”. However, the relationship between animals and humans is far more intricate, Dr Yuen said. For example, rearing dogs and cats in cramped urban areas could cause public health problems such as the spread of bacteria. 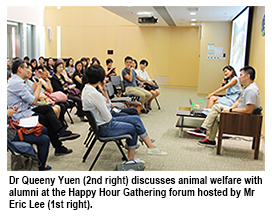 In fact, she continued, topics related to animals such as pathology, food safety, public health and animal welfare require academic research, helping us to better understand animals. For example, how large should the living space for animals be, and what is the best way to rear them. In addition to scientific studies, Dr Yuen said empathy was very important, requiring humans to see life from an animal’s perspective.
Dr Yuen became interested in animals when she was a student, and she developed a deeper relationship after working in the animal care industry. She keeps a pet, but not a dog or cat. She has a hamster. “Due to my busy work and unpredictable work hours, I have chosen a hamster as my pet. As it sleeps during the day and becomes active at night, I can play with it when I come home after work,” she explained.
Dogs and cats are regarded as friends to human, and so we should pay more attention to their welfare, Dr Yuen added. However, do animals that we eat such as pigs, cows and sheep have anywelfare? This is a difficult question for pet lovers. “We should all think about what animals mean to us. We naturally care about pets that we keep as companion in our homes. However, we should also care about the welfare of animals like pigs and cows,” Dr Yuen said. She suggested that the empathy for the welfare of animals should not be restricted to pets only. 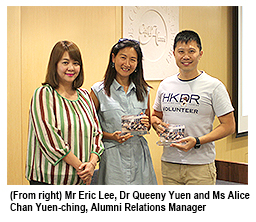 Regarding animal abuse issue in recent years, Dr Yuen pointed out that we should try to understand the mentality of the abusers as well as the cultural influence. For instance, eating dogs and shark fins is culture-based. “Culture has its root in ancient history, but it does not mean that it cannot be changed. We just need to have more understanding, pay more respect and study more,” she said.
Dr Yuen said Hong Kong is home to different kinds of animals, including Chinese white dolphins, monkeys and buffalos. “We should know more about their characteristics so that the community can have a deeper discussion of the welfare of animals,” she concluded, adding that she hoped that more professionals can be trained through relevant programmes to improve the welfare of animals.