Leading physicist discusses research on the properties of ice 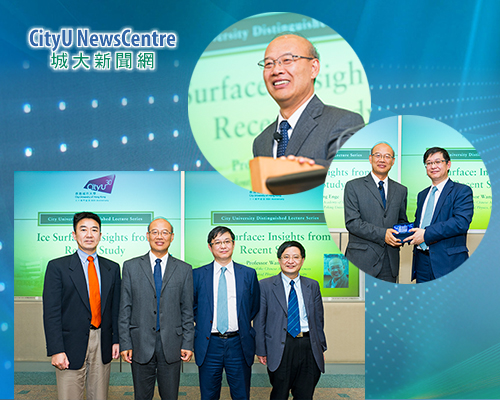 Renowned Chinese physicist Professor Wang Enge visited City University of Hong Kong (CityU) and gave a talk titled “Ice surface: Insights from recent study” at a CityU Distinguished Lecture. Held at the Connie Fan Multi-media Conference Room on 26 June, the lecture attracted a nearly full house with an audience of close to 200.
Although ice is one of the most common materials on earth, up to now we have known very little about its basic qualities. But ice plays a critical role in many physical and chemical processes, Professor Wang said, including life in earth’s cryosphere (the frozen areas of our planet) and our global climate.
Over the past few years, Professor Wang pointed out that he and his team have made significant progress in the study of ice, including the mechanism of ice growth at the molecular level and its physical/chemical reactivity in high altitude clouds.
In his speech Professor Wang also discussed developments at the Chinese Academy of Sciences and congratulated CityU for its achievements over the past 30 years.
Professor Wang, Vice President of Chinese Academy of Sciences and Chair Professor of Physics, Peking University, specialises in condensed matter physics. He has served as Director of the Institute of Physics, Chinese Academy of Sciences; Director of the Beijing National Laboratory for Condensed Matter Physics; Executive Vice President and Provost of Peking University; and President of Peking University between 2013 and February 2015.
During his career, Professor Wang has published over 260 papers in prestigious journals such as Science and Nature.
In recognition of his achievements, Professor Wang has received the Humboldt Research Award and been named an Academician of the Chinese Academy of Sciences, Fellow of the Academy of Sciences for the Developing World, Fellow of American Physical Society, and Fellow of the Institute of Physics, among others.
​