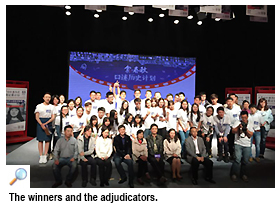 A teacher and students from the Department of Media and Communication (COM) at City University of Hong Kong (CityU) took home three major awards at the first College Students' Oral History Video Recording Contest, which was held in Beijing on 10 May. 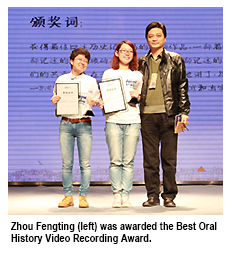 The award-winning documentary consists of interviews with COM students’ relatives talking about their histories. The adjudicators complimented the team on the production of the documentary, the content and the level of expert input.

The contest was jointly organised by Beijing Yongyuan Foundation, Zhejiang Dunhe Foundation, the “My History Project” of China Social Assistance Foundation and the Cultural Channel of Tencent. All college students in China were eligible to participate.

The CityU team worked on Family Album for two years. Nearly 50 students participated in the project and 38 short films were produced in total. 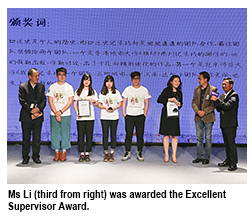 The experience enabled the students to have a deeper understanding of their family members. It was also an opportunity for reflection and a means of assessing career and life goals.

Ms Li said COM planned to build an archive of videos about 100 ordinary Chinese families over the coming years.

Another documentary series, titled Our Fathers' Revolution, produced by COM four years ago was also highly praised by experts and well received by the documentary lovers.