We all smile in the same language 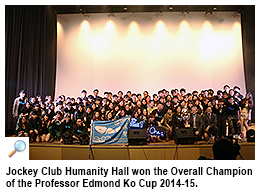 Smiles, laughter, cheers and applause filled the air at City University of Hong Kong (CityU) on a Wednesday night. We may come from different races and countries; we may have different mother tongues; and we may live in different halls. Yet this night brought us all together, a great mixture of cultural diversity from around the globe. 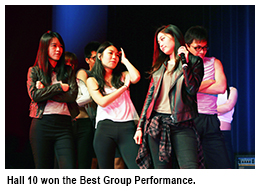 At the contest, singers from Hong Kong, mainland China, Australia and Korea, among other countries, gave a range of performances in different styles, making for a remarkable night.

The prize presentations created a great deal of excitement as awards for aquatic, athletic, soccer, table-tennis, photography, badminton, basketball and the singing contests were handed out. There were also prizes for the Inter-hall Energy Saving Competition. 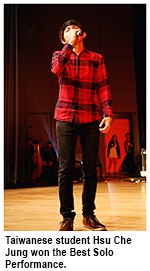 A total of nine awards for the singing contest were given out: to students from Jockey Club Humanity Hall, Alumni Civility Hall, Jockey Club Academy Hall, Lee Shau Kee Hall, Hall 10 and Hall 11.

The most exciting moment came when Jockey Club Humanity Hall was announced as the overall champion of the Professor Edmond Ko Cup.

The moments of victory do not only belong to the winning halls, but to all student residents who have worked hard to make the Professor Edmond Ko Cup so successful. There are a total of 12 halls, yet thanks to the Professor Edmond Ko Cup, we are one, united family. We may be different in many rich and diverse ways, but we smile in the same language.