Fourteen students from City University of Hong Kong (CityU)’s School of Creative Media (SCM) will showcase artwork inspired by an expedition to the amazing underground formations in the jungle caves of Vietnam at an exhibition in early June. 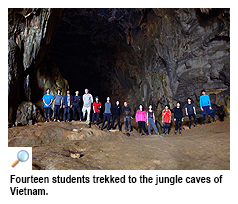 The expedition to the Tu Lan cave system in the Vietnamese countryside from 22 February to 1 March was part of the School’s groundbreaking Extreme Environments programme.
The students are the first group of artists and designers to see many of these stunning caves, and it has proved an invaluable experience for enhancing an understanding of environmental issues.
The students explored six distinct cave networks where they collected the raw materials to create 13 different artworks, each directly connected to a unique phenomenon in the remote caves.
The artwork will be presented in the form of videos, interactive films, generative animations, dome-based movies, installations, projections, among other formats, at the exhibition to be held at the Run Run Shaw Creative Media Centre. 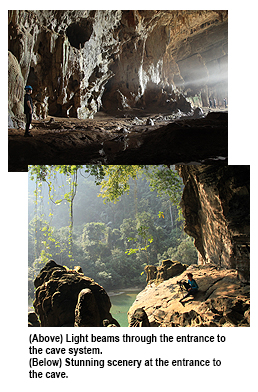 Even more physically demanding than the School’s previous expeditions to Antarctica and the Mojave Desert, the students followed local villagers and tribe guides through dense jungle, scaled jagged mountains and swam hundreds of metres along underground rivers in complete darkness, all the while carrying a range of media and scientific gear.
“With some caverns the size of city blocks and towering 20 storeys inside the mountains, the students did a range of creative research while in the caves,” said Mr Scott Hessels, Associate Professor of SCM and the executive producer of the programme.
“Some worked with scientific sensors to measure cave acoustics and echo and colour spectrums in the beams of light, wind movement, water flows, stalactite formations and more. Others used media technologies to project images, light patterns and laser scans in the caverns,” he said.
The programme is committed to protecting the natural sites selected for the expeditions—nothing is taken or left behind. The students camped in the jungle or underground in the caves themselves. They took water purifiers with them so they could drink stream water, and indigenous inhabitants of the jungle helped transport food and camping equipment. 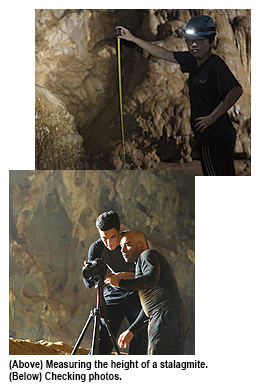 The trek was led by members of the British Cave Research Association who discovered many of the sites only three years ago.
“The Vietnam Caves Expedition is not only an opportunity for making art and science projects, but also an unforgettable experience, and a chance to reflect on what nature really is,” said Janet Choi Ka-man, a Year 3 student majoring in new media.
“Darkness does not necessarily imply invisibility. We heard the dripping of mineral from the stalactites that would later form stalagmites, we held and stepped on rocks, and we saw light beams from entrances,” she said.
Looking upon the formation in the caves, Janet said she was astonished by the naturally occurring artistry that enables tiny drips of water to build immense stalagmites over thousands and thousands of years. “When a drip dropped on my shoulder, I wondered how my presence might hinder natural formation,” she added.

“The expedition allowed me to explore one of the world’s most remote sites in Tu Lan network,” said Harsh Agrawal, a Year 1 student majoring in creative media. “It also provided me with a chance to overcome my fear by swimming in complete darkness within the cave, encountering vipers and crossing swampy valleys. I did macro photography of bugs, and different kinds of spiders inside the jungle which I plan to use for my art installation.”
He said he learned a lot about the Vietnam War, too, while visiting ruins in Hue and finding out about active landmines in former militarised zones.
CityU’s Extreme Environments programme is a highly regarded learning experience in discovery-based education presented by SCM. Last year's Antarctica expedition and exhibition were among the highlights of the University’s 30th anniversary celebrations, and the trek into the Mojave Desert in 2012 established partnerships with some of the world’s leading scientists and field research organisations.
During each expedition, students collect information about an endangered, remote ecosystem and transform it into new media artwork that seeks to promote a better understanding of issues affecting the environment.