From classical literature to modern poetry 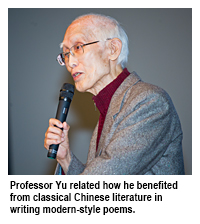 Professor Yu believed that modern-style poets must be well-versed in classical Chinese literature, including the earliest songs in The Book of Odes, the fu or rhyme prose in the Han period, the poetry in the Tang period, and the ci-poetry in the Song period. Also, they must familiarise themselves with China’s new literature written in the vernacular since the May 4th Movement in 1911, plus a knowledge of foreign literatures from Western, Japanese and Indian cultural traditions.

Enlivening his talk, Professor Yu read aloud 20 of his modern-style poems, the inspiration for which, he explained, had come mainly from what he thought about some famous Tang poems.

For example, his poem Cool on the Seven-String Lyre, depicting how he felt while listening to some old-time gramophone records, was inspired by Listening to the Lyrist Playing by Liu Changqing, a poet in the Tang Dynasty. Another poem of Professor Yu’s, titled Reading the “Eight-Trigram Battle Array”, was written in tribute to a well-known Tang poem, namely Stones in the Eight-Trigram Battle Array by Du Fu, who is revered as the “sage poet”. 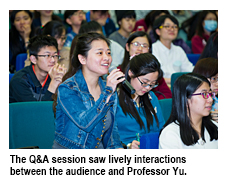 Another category of Professor Yu’s modern-style poems, however, is the brainchild of his pure imagination. For example, The Terracotta Warrior, which he read aloud during the lecture, retold an imaginary talk to a terracotta warrior unearthed from the mausoleum of the First Emperor of the Qin Dynasty.

Another such poem, titled On the Express Highway with Li Bai, told of an imaginary ride on a highway in Taiwan, with Li Bai, also a great Tang poet, driving the car under the influence of alcohol while Yu himself sat next to the driver, talking to him all the way.

“Of course, the ancients did not experience our modern-day life,” he said. “That’s all my own imagination, but everything in my poems is based on anecdotes and allusions about the ancient poets.”

“I hope that modern-style poems today will make the classical and the vernacular blend well, and make the ancient and the modern cross the time barrier,” he concluded.

Professor Yu is also a translation specialist, having devoted most of his lifetime to Eastern and Western literatures and their translation.

He highlighted the strength of classical Chinese poetry: succinct diction carrying wide and deep meanings. He also pointed out that poetry, music and painting made a mutually agreeable trio. Poetry, he explained, stirred up semantic images and mental pictures, hence possessing properties of painting; it also featured rhythms and tones, hence possessing properties of music, he said. 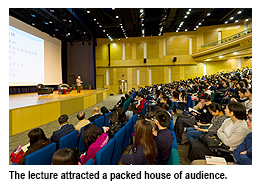 “The Greeks called their nine goddesses presiding over various arts and sciences by a collective name, ‘the Muses’,” Professor Yu said. “Even the words ‘music’ and ‘museum’ derive from ‘Muse’, which shows the ancients believed that various genres of art were mutually agreeable.”

Professor Yu further pointed out that the various genres could merge into one another. Poems, for example, can be presented as paintings, or they can be set to music and turned into songs.

“Inspiration comes from life, but life is limited,” he said. “Yet, once genres of art are transformed, they will turn the limited into the limitless.” Professor Yu confessed to a love for applying music techniques to the composition of modern-style poetry and prose, checking the tones and rhythms of his words by ear so as to improve his writings.

The lecture was held in Wong Cheung Lo Hui Yuet Hall, in which none of the 600 seats were left empty, making it necessary to open up the Connie Fan Multi-media Conference Room where the lecture was televised live.

The Q&A session saw lively interactions between the audience and the speaker. One student read aloud a poem of her own composition; another student, who had set Professor Yu’s best-known poem Nostalgia to music, sang it loud for all present. Professor Yu praised that as a good example of artistic transformation.

Professor Yu was born in Nanjing, China, and moved to Taiwan when he was 22. He graduated from the Department of Foreign Languages and Literatures, National Taiwan University, and later earned a Master of Fine Arts from the University of Iowa, US.

A prolific writer, Professor Yu’s publications cover modern-style poetry, writings in prose, literary criticism and translations. He won the 34th National Cultural Award of Taiwan, and Wu San-lien Literary Award in prose. His writings have won the Best Book of the Year Award from the United Daily News of Taiwan several times.