​Different opinions naturally arise in a mature society, and young people should discuss issues objectively, base their arguments on facts, and apply the same principles to life in general, according to Professor Way Kuo, President of City University of Hong Kong (CityU). 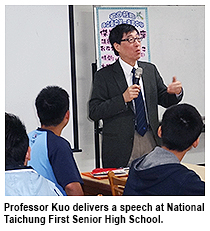 Professor Kuo was speaking at his alma mater National Taichung First Senior High School on 4 March. He grew up and studied in Taiwan, and later moved to the US to further his studies and work in research.
Professor Kuo frequently goes abroad for idea exchange, and he also regularly gives talks to high school students. When asked for tips on choosing the right university, he suggested that the campus environment, learning atmosphere, and outstanding teaching staff should be among the key factors for consideration.
“I was a science student when I was in high school, but my favourite subject was history because my history teacher then was a very good teacher. I can still remember the interesting stories she told at the end of classes,” he recalled. 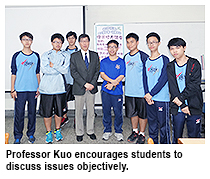 As regards the question on where to further one’s studies, Professor Kuo said each place was unique when comparing the US, Taiwan, Hong Kong and mainland China. “Hong Kong is very open and cosmopolitan; the US has a simple study life; Taiwan is a newly born democratic society, and mainland China is becoming more open,” he added. Students should try to understand the characteristics of each place and consider their own situation before making their choice.
In addition, Professor Kuo led a CityU delegation to Taiwan to participate in the Universities and Vocational Schools Education Expo in Taipei from 7 to 8 March where he took the opportunity to introduce CityU to Taiwan’s press. 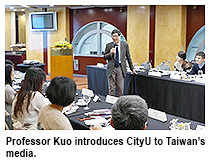 He told the media that CityU emphasised and exceled in both teaching and research, and was dedicated to nurturing top professionals. The University occupied top spots in international academic rankings in multiple disciplines and came first in engineering among universities in Taiwan and Hong Kong, while CityU’s College of Business was ranked second in the Asia Pacific, he continued. 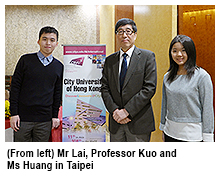 Two Taiwanese graduates from CityU, Mr Lai Wen-ping and Ms Huang Chia-yun, who are now working professionals, attended the press conference and talked about their school life at CityU.
Mr Lai now works in accounting in Taiwan. He said studying in CityU helped him a lot in his career advancement. Since he is used to learning in English, his superiors ask him to liaise with non-Chinese speakers and give him more opportunities to use his skills.
Ms Huang now works in the banking industry in Hong Kong. She said CityU gave students lots of opportunities to exchange ideas, adding that she and her Hong Kong schoolmates had the chance to learn from each other, which broadened her horizons and was very beneficial for her.