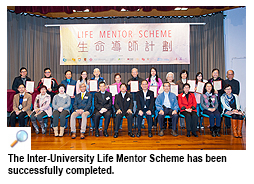 The Inter-University Life Mentor Scheme organised by City University of Hong Kong (CityU) has successfully increased awareness and understanding between young people and senior citizens.
The scheme provides opportunities for university students and the elderly to know more about each other’s different lifestyles and values.
Professor Paul Lam Kwan-sing, Chief-of-Staff, said at the closing ceremony that today’s young people may have a negative impression about the elderly due to a lack of interaction.
However, older members of society were now more knowledgeable and actively took part in voluntary work after retirement to make important contributions to society, he added.
Professor Alfred Chan Cheung-ming, Chairman of the Elderly Commission, said that more cross-generational activities should be organised because of the benefits that they bring to all parties.
Mr David Chow Tak-fung, one of the sponsors and life mentors on the scheme, said the post-80s and 90s generations had a weaker bonding with their parents and older family members, and they mainly used smart phones and computers for communication. 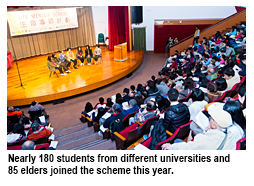 However, the scheme had helped participants access direct communication and learn from others, said Mr Chow, adding that he had discovered a great deal about the mentality of young people through the scheme.
The participating students said that they had learned a lot on the scheme, too. After discovering from the senior citizens about the lack of education opportunities in the past, they said they now cherished their university studies. Also, they used to think that it was annoying to be nagged by their parents; now they are willing to listen and talk to their mums and dads.
The scheme was developed and launched by Dr Alice Chong Ming-lin, Associate Professor from CityU’s Department of Applied Social Sciences. Dr Chong received the Award for Teaching Excellence by the University Grants Committee (UGC) in 2013. 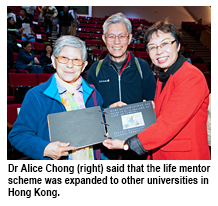 With sponsorship from the UGC, the scheme was expanded to the University of Hong Kong, the Chinese University of Hong Kong and Hong Kong Polytechnic University this year.
Dr Chong said that nearly 180 students from different universities and 85 elders had joined the scheme this year. Each group comprised two students and one elder. After a few interactive meetings, the students produced a story book incorporating writings and photos depicting delightful and unforgettable moments in the lives of their mentors.
The content of the beautifully designed story books reveals the care and enthusiasm of the students.