​
The application of nanotechnology to engineer sensors and actuators for biomedical applications were the twin foci of a talk by Professor Stella Pang, Chair Professor of Electronic Engineering at City University of Hong Kong (CityU), in the President’s Lecture Series: Excellence in Academia on 9 February. 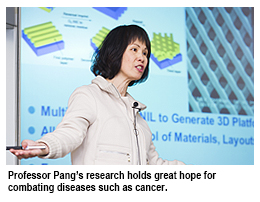 In her presentation, Professor Pang, who is also the Director of the Centre for Biosystems, Neuroscience, and Nanotechnology at CityU, touched upon nanotechnology for devices and microsystems; the application of nanotechnology in biomedical microsystems; platforms to control cell migration; neural probes; and plasmonic biosensors to detect cells.
“Novel biomedical systems could be generated by combining nanotechnology with biological science,” explained Professor Pang, who was Professor of Electrical Engineering and Computer Science at University of Michigan (1990–2011) and Associate Dean, College of Engineering, University of Michigan (2002–2007) before joining CityU in 2012.
One of the key areas of her research is the manipulation of cells on different biocompatible nano surfaces to see how they can be stretched and grown.
“We develop different platforms with different designs to monitor the behaviour of migrating cells, for example their speed and direction,” she said.
What’s interesting is that some cells can move twice as fast on patterned surfaces than on smooth surfaces, which might well be explained by the size and length of the leading edge of a cell, and the way it interacts with the patterned surface.
One of the drivers for such research is to develop biosensors that can enter the body and discover useful medical information that can help scientists to combat diseases such as cancer, or assess cellular degradation in people who might be suffering from neurological disorders.
A particularly exciting area of the application for nano-scale biosensors is for helping to construct 3D models of tumours. The aim would be to help decrease the number of experiments that necessitate the use of lab animals, test new drugs, and create new bioreactors for other pathological tissues.
Professor Pang’s research areas include nanofabrication technology, nanoimprint, biomedical, microelectronic, optical, and microelectromechanical devices and microsystems.