​
It is imperative that mainland China changes its nationality policy for better minority governance, according to Professor Zang Xiaowei, Dean of the College of Liberal Arts and Social Sciences at City University of Hong Kong (CityU).
In reviewing the mainland’s policies towards the more than 50 formally registered minority groups in China, Professor Zang argued that China had only met the minimum standards of state conduct toward ethnic minorities. 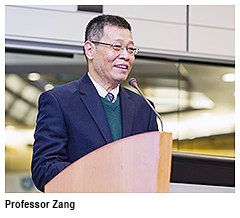 “Beijing’s policy is lagging behind the global trend with regard to the protection of minority rights,” said Professor Zang, speaking at the President’s Lecture Series: Excellence in Academia on 20 January at CityU in front of a packed auditorium.
Two key questions underpinned the substance of the talk: Does China have a good minority rights regime? and Is the West entitled to criticise China’s nationality policy? The conclusion of the talk suggested that China did not have a sufficiently good minority rights regime, and that some criticisms were valid.
The issue of minority rights in China is hugely important because the numbers in minority groups are significant. The 56 state-recognised nationality groups make up a relatively small percentage of the total population in China (8.4%), but in people terms that is about 105 million individuals.
“They are outnumbered only by the peoples of Brazil, Bangladesh, India, Indonesia, Nigeria, Russia, Pakistan, the United States, and the Han people of China,” said Professor Zang whose new book Ethnicity in China will be published next month.
The problem is that some members of these minority groups have been driven to violent actions, creating some degree of instability, because of what they perceive to be threats to their linguistic, social and cultural identities.
“There has been enhanced international attention to China’s minority groups in recent years due to large scale ethnic unrest and violence in China, which have led people to examine China’s nationality policy,” Professor Zang said. 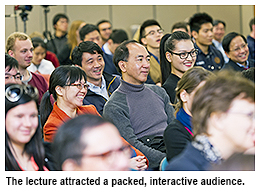 However, Beijing has been adamant that Western criticisms of its nationality policy, which strongly emphasises acculturation and eventual assimilation into a harmonious Han community, are not valid, in part because China does not countenance interference in its domestic affairs.
In any case, according to Professor Zang, China claims that it does a lot of good things for its minority groups; its nationality policy is part of domestic politics, subject to no criticism by foreign forces; and the West is not qualified to criticise China because it is infested with racial discrimination itself.
In recent years, though, norms of state sovereignty and responsible international behaviour, such as non-aggression and non-interference in internal affairs, dating back to the Peace of Westphalia in 1648 upon which the modern European state system is built, successively lost plausibility in the post-1989 era, i.e. the end of the Cold War, Professor Zang argued.
He said that in today’s international system minority rights were human rights which were subject to international norms and not limited to the jurisdiction of the state.
This is not to say that Beijing does not have a reasonably good legal framework for minority affairs, or that the mainland government has not taken steps to reduce ethnic inequality. The problem was often more cultural, he said.
“The protection of minority languages and religions has been less impressive and unequivocal than the promotion of affirmative action and regional economic growth,” he said.
For the good of China, Professor Zang, and for the sake of a more harmonious and stable society, the mainland government has to do more for minority groups, such as offering more freedom of religion and higher degrees of ethnic regional autonomy. In addition, Han officials learning minority languages, greater quotas for hiring minority cadres, and more recognition of their contributions would go a long way to easing tensions and developing greater levels of understanding.
“The current nationality policy is outmoded but I am confident that China is moving in the right direction for human rights, multiculturalism, diversity and self-determination,” he said.