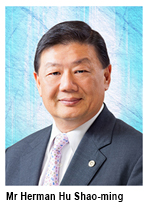 The Chief Executive of Hong Kong SAR has re-appointed Mr Herman Hu Shao-ming as the Council Chairman of City University of Hong Kong (CityU), effective from 1 January 2015, for another term of three years.
Mr Hu has contributed greatly as Chairman in promoting the University for the benefit of students and society, and the University has benefited immensely from his able leadership and valuable advice.
In addition a leading member of the business community has been appointed to the Council with effect from 1 January 2015 to 31 December 2017. 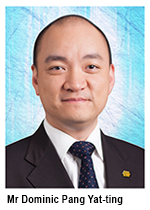 Mr Dominic Pang Yat-ting, is the Chairman and Non-Executive Director of Chun Wo Development Holdings Limited. He is active in public service in both Hong Kong and the mainland, and is currently a member of the Hebei Provincial Committee of the Chinese People's Political Consultative Conference, PRC; the President of the Hong Kong Industrial & Commercial Association; Chairman of the Hong Kong New Arrivals Services Foundation; Vice-President of The Hong Kong Real Estate Association; and a member of the Hong Kong Trade Development Council Mainland Business Advisory Committee.
Meanwhile Professor Horace Ip Ho-shing, Vice-President (Student Affairs), will serve on the Council as a Senate Representative for a term of three years starting from 1 January 2015, while Mr Cyrus Chu Kwok-chi, the newly elected Students' Union President, will serve on the Council for a year from 1 January 2015, and Mr Zhou Junze, the elected postgraduate student member, will serve for a term of one year, with effect from 15 November 2014.