Mr Frank Chan Fung, a graduate from School of Creative Media (SCM) at City University of Hong Kong (CityU), took a series of photographs of 23 people with Down syndrome and showcased their happy and spirited sides to enhance people’s understanding of them. 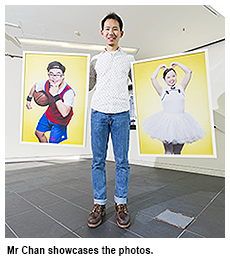 “My secondary school English teacher told me that people with Down syndrome are the purest people,” said Mr Chan, whose project received funding from the Hong Kong Arts Development Council in 2014.
“His words were etched in my mind, and so when I needed to submit an assignment about human faces for my photography course at SCM, I worked as a volunteer at the Hong Kong Down Syndrome Association and helped to take photos of their activities,” Mr Chan added.
There is a general public perception, My Chan said, that people with Down syndrome live in their own world and no one can communicate with them.
“However, after talking with them, I found that they are kind and innocent people who have no worries or fears. As long as you are willing to talk to them and try to understand them, they will warmly respond to you. Through this series of photos, I hope the public will know more about them,” he said. 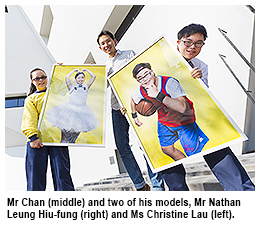 Starting from last August, Mr Chan invited 23 teenagers and youngsters with Down syndrome to freely do whatever they like before the camera.
“They danced or performed Cantonese opera or martial arts,” he observed. “There were many happy moments during the shoot. For instance, one model showed no facial expressions at all at first, but when I played her favourite music, she danced with great enthusiasm.”
Mr Chan said he was grateful to the Hong Kong Down Syndrome Association for contacting the models, the Hong Kong Arts Development Council for their sponsorship, and the Hong Kong Cultural Centre, C.C. Wu Building and Taikoo Place for providing the venues for the photography exhibition. 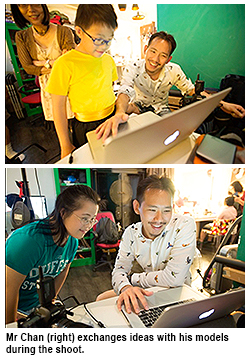 The Hong Kong Down Syndrome Association estimates that there are about 2,000 to 3,000 people with Down syndrome in Hong Kong. They often have a weaker physical health and they may develop ageing problems 20 years earlier than people who do not have the syndrome. Around one in every 600 babies is born with the syndrome.
“People with Down syndrome have their own hobbies, strengths and capabilities, just like anybody else, and there is no reason for discrimination or prejudice, because that puts additional pressure on them,” Mr Chan said.
Titled “The Purest People”, the exhibition will showcase the series of photographs at the Hong Kong Cultural Centre, C.C. Wu Building and Taikoo Place in January, March and April, respectively.