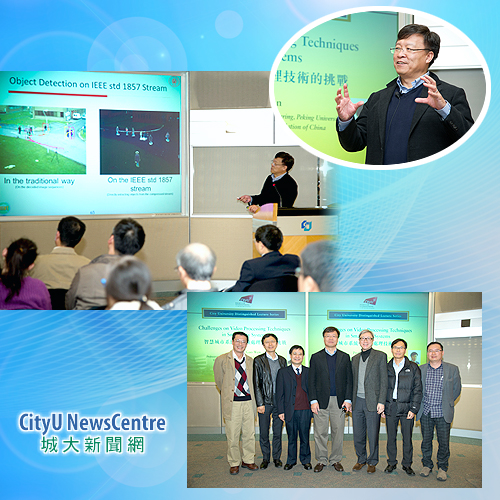 Video surveillance systems have been installed in many cities in China, however they face a number of pressing challenges, according to the latest speaker in the CityU Distinguished Lecture Series.

Problems arise because it is difficult to store large volumes of data, hard to find the targeted data and the quality of images is poor, said Professor Gao Wen, Professor of School of Electronics Engineering and Computer Science at Peking University, in his talk titled “Challenges on Video Processing Techniques in Smart City Systems”, held on 23 December at City University of Hong Kong (CityU).

“A new generation of intelligent video surveillance systems is proposed to solve the problems,” said Professor Gao, who specialises in the areas of multimedia and computer vision including video coding, video analysis, multimedia retrieval, face recognition and multimodel interfaces.

Professor Gao presented possible solutions to the problems, with reference to IEEE 1857, and discussed avenues for future development in the field. IEEE 1857 is a standard for advanced audio and video coding created and maintained by a committee under the IEEE (Institute of Electrical and Electronics Engineers) Computer Society.

Professor Gao is vice president of the National Natural Science Foundation of China; fellow of the IEEE; fellow of the Association for Computing Machinery; and member of the Chinese Academy of Engineering; He has received six national awards in science and technology achievement.