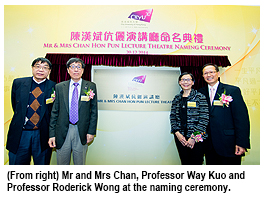 Lecture Theatre 18 in Academic 1 at City University of Hong Kong (CityU) has been named “Mr & Mrs Chan Hon Pun Lecture Theatre” in appreciation of the support and generous donations to the University made by Mr Chan Hon-pun and his wife Mrs Chan Hon Yuk-yee.
The naming ceremony on 20 December was officiated by Mr and Mrs Chan, Professor Way Kuo, CityU President, and Professor Roderick Wong Sue-cheun, Vice-President (Development and External Relations).
Being a successful entrepreneur today, Mr Chan led a hard life and had to make his living when he was still a teenager. However, firm in the belief that it is essential to approach all tasks, no matter how simple they are, with due diligence and efficiency, Mr Chan overcame adversity to set up his own business, which he eventually turned into a success story.

In his address at the ceremony, Mr Chan said he was deeply impressed by CityU’s great advancements since 2008 when he first became connected with the University. He felt that CityU was a young and caring university that deserved the support of society. “CityU has excelled in various aspects such as world university rankings, faculty qualifications, research and graduate achievements,” he said.
Mr and Mrs Chan’s generous donations will be used to support the University’s strategic initiatives and to set up an exchange scholarship to help students in need. Mr Chan also encouraged students to cherish the precious learning opportunity at university.
On behalf of the University, Professor Kuo thanked Mr and Mrs Chan for their donations. He was pleased and touched to see so many people in attendance at the lecture theatre, which was a proof that Mr and Mrs Chan were highly regarded philanthropists. 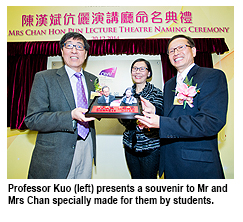 Professor Kuo said that Mr and Mrs Chan had been supporting education institutions in mainland China and Taiwan, but this was the first time that they had donated to a local university, adding that CityU was privileged to be their first choice.
Professor Wong said it was a great honour for CityU to receive a donation from Mr and Mrs Chan. He was pleased to see before his retirement that the Lecture Theatre with the lucky number 18 had been named after Mr and Mrs Chan in commemoration of their benevolence towards the University.

Located on the 4th floor of Academic 1 at CityU, “Mr & Mrs Chan Hon Pun Lecture Theatre” has a seating capacity of 200 and an area of around 210 square metres. Equipped with barrier-free access facilities and advanced multi-media computer and audio and visual systems, the theatre can be used for teaching, seminars and international conferences.