​
The Court of City University of Hong Kong (CityU) was briefed on the latest developments and key initiatives of the University at its 8th meeting on 4 December.

Dr Norman Leung Nai-pang, Pro-Chancellor, who has been associated with the University for 30 years by the end of 2014, just about CityU’s entire lifetime, chaired the meeting.
“It is indeed a great pleasure for me in CityU’s 30th anniversary year to witness our rapid development and international recognition we received,” he said.
He welcomed the external members of the Court who were newly appointed or re-appointed in 2014, and thanked the members whose terms of office will expire by the end of December 2014.
He also touched on topics such as international recognition, innovative interdisciplinary projects and faculty accolades in his opening remarks.

Mr Herman Hu Shao-ming, Council Chairman, thanked Dr Norman Leung for taking up the substantial task of chairing the 30th Anniversary Organising Committee, which came up with amazing celebratory programmes.
Mr Hu reported to the Court that the Council had approved a proposal for the Community College of City University (CCCU) to form a strategic alliance with the University of Wollongong, Australia, facilitating the development of new programmes in CCCU and paving the way for it to become a degree-granting university.
He also reported on collaboration with Shuangliu Government for the establishment of the City University of Hong Kong Chengdu Research Institute, and the updates of the School of Veterinary Medicine. 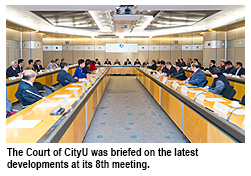 In addition, Mr Hu informed Court members of a newly approved initiative and a refinement to staff-related policies. He also shared that the Council had reviewed the structure of its committees and approved to streamline the operations of the Council by forming ad hoc task forces to take the place of standing committees. His talk also outlined major accomplishments of the University, such as excellence in teaching and research, and impressive ranking results.
In his report, Professor Way Kuo, University President, told Court members that CityU was in the middle of establishing a five-year strategic plan. “In the previous five-year strategic plan, we defined CityU as a professional school. In the next strategic plan, we want to deepen the theme of professional education and look at even more academic values.” 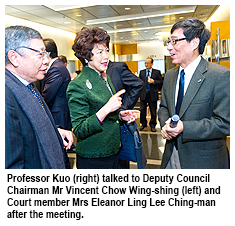 Professor Kuo also told the Court that CityU had started its academic unit review a few months ago, the purpose of which is to examine all the academic units, ensuring their relevance to society and alignment with the theme of the University, i.e. excelling in research and professional education for the benefit of Hong Kong.
Two audio-visual presentations were made at the meeting to share with members a summary of the University’s achievements in 2014 and some of the major celebratory events of the 30th Anniversary.