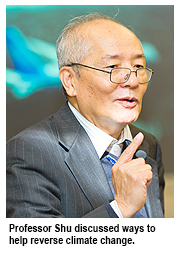 What do you do when highly toxic liquid is leaking into the environment from a compromised nuclear power plant? Freeze the liquid, of course.
That was just one of the many solutions to a suite of climate and environment problems facing humanity that Professor Frank Shu, University Professor Emeritus of the University of California at Berkeley and San Diego, presented at a City University Distinguished Lecture on 3 December.
In the talk, titled “Reversing climate change: using carbon technology to offset carbon emission”, Professor Shu argued that the potentially catastrophic impact of climate change on life on Earth required humans to find innovative ways not only to reduce greenhouse gas emissions and to use carbon as a resource rather than as something to be disposed of, but also to search for new, and enhance exisiting, technologies, such as ways to freeze leaking radioactive materials.
“The worse-case scenario for a compromised nuclear power plant is a meltdown,” he said, with reference to the damaged nuclear reactors in Fukushima following the earthquake and tsunami in March 2011 in Japan. “So, freeze the melting liquid as soon as the reactors are damaged. You might lose a plant, but you won’t damage the environment.”
The bulk of the talk focused on two technologies that Professor Shu and his team are currently working: a new form of supertorrefier, which can turn bio-mass into renewable energy product, reducing our dependence on fossil fuels.
“Supertorrefiers have the potential of creating solid, liquid, and gaseous biofuels that are economically competitive with coal, petroleum, and natural gas,” he 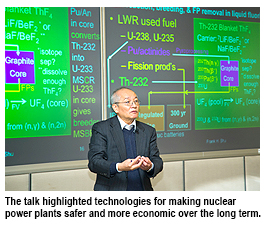 said.
Also under discussion was the molten salt-breeder reactor that Professor Shu argued had the potential to replace the light water reactors with a “walk-away safe, less expensive, more proliferation-resistant form of nuclear power”.
Both technologies, Professor Shu said, offered hope for the future, and he urged the younger members of the audience to consider his ideas for their projects since, as someone who had retired three times already, he was too old to take up these challenges.
After all, he said, taken together, the supertorrefier and the molten salt-breeder reactor promised a relatively gradual transition away from fossil fuels while at the same time searching for ways to support the fossil-fuel industry during this transitional phase.
Economic considerations, he said, were crucial, too.
“The old model for business has been to use resources to build wealth and create waste,” he said. “The new model has to be to use waste to build a sustainable society.”
Professor Shu is a member of the US National Academy of Sciences, the American Philosophical Society, a Fellow of the American Academy of Arts and Sciences, and an Academician at the Academia Sinica in Taiwan.