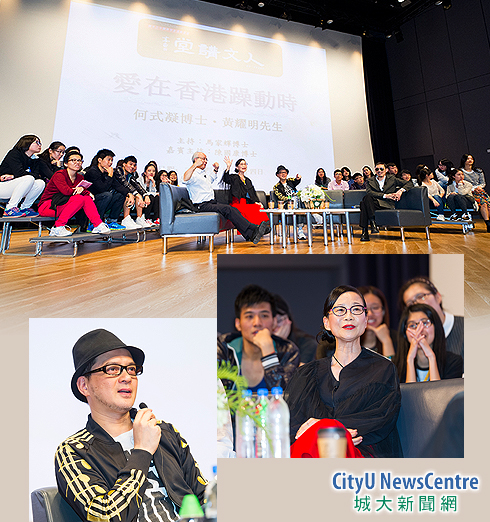 About 400 students and guests attended a talk by singer Mr Anthony Wong Yiu-ming and Dr Petula Ho Sik-ying, Associate Professor in the Department of Social Work and Social Administration at the University of Hong Kong, at City University of Hong Kong (CityU) on 14 November.
The talk, titled “Restless Love in Hong Kong”, was part of the Humanity Talk Series organised in celebration of CityU’s 30th anniversary.
The talk was hosted by Dr Ma Ka-fai, Assistant Professor in the Department of Chinese and History, and Dr Raymond Chan Kwok-hong, Dean of Students.
Mr Wong and Dr Ho shared moments when they felt love and restlessness in Hong Kong. Mr Wong’s feeling of restlessness started in 1982, when mainland China and Britain began talks on the handover. Since then, he has been exploring his own identity, and he has expressed the restlessness that he has experienced through his music.
Dr Ho said she was a restless person and felt a calling from the city that urged her to offer the power of love and contribute to the city.