​
It was a trick question, and the audience fell for it. 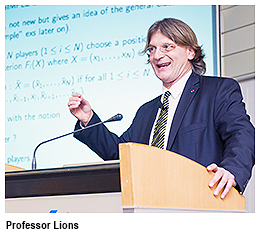 “What’s the second most common language at CityU?” asked Professor Way Kuo, President of City University of Hong Kong (CityU), in his opening remarks at the France–Hong Kong Lecture Series on 10 November.
French, Chinese and German were some of the suggestions called out by the audience.
"No,” Professor Kuo said. “It’s mathematics!”
CityU has a long and proud history in the study and application of mathematics, counting several renowned mathematicians on staff, such as Professor Stephen Smale, one of very few mathematicians in history to win both the Fields Medal and the Wolf Prize in mathematics, and Professor Philippe Ciarlet, who founded the France–Hong Kong Lecture Series back in 2005.
Our status was further enhanced by a talk delivered by Professor Pierre-Louis Lions, one of the most distinguished mathematicians in the world today. 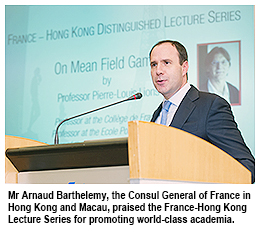 He is a Professor at the Collège de France, Professor at the École Polytechnique, a Member of the French Academy of Sciences, and a Fields Medalist (1994). He also holds an Honorary Doctorate degree from CityU.
The subject of his talk, titled “On Mean Field Games” (MFG), took the audience on a fascinating journey into the heart of a new class of mathematical models.
Essentially, MFG describes the behaviour of a very large number of “agents” who optimise their decisions while taking into account, and interacting with, the other agents.
A useful application would be traffic congestion where a driver has to make decisions about how to get from A to B by avoiding the heaviest concentration of cars in a not-too-long period of time. 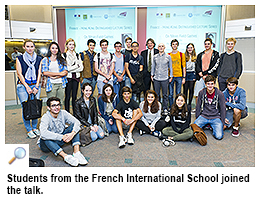 Another example could be applied to a person trying to find the best place to put her towel down on a busy beach in the summer.
With reference to a suite of cutting-edge work by world-famous mathematicians such as the Nash equilibrium in non-cooperative game theory posited by Professor John Nash, 1994 Nobel Laureate in Economic Sciences, and the recipient of a CityU Honorary Doctor of Science, Professor Lions explained how MFG developed and could be applied.