Scholars have been commenting in recent months about the apparent similarities between the historical and political context in which World War One broke out in 1914 and with today’s geopolitical situation, with specific reference to the tensions between the US and mainland China. 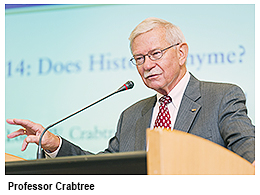 Speaking at a City University Distinguished Lecture on 5 November, Professor Loren Crabtree, Emeritus Professor of History at the University of Tennessee, noted areas of comparability and asked what role universities had to play today in trying to prevent tensions escalating between the US and China.
“While history does not provide a blueprint for predicting the future, it offers us important lessons,” said Professor Crabtree who has visited City University of Hong Kong on two previous occasions, and praised the University for its development over the past 30 years.
If we looked back at history, he added, we could avoid what the US historian Barbara Tuchman called the “march of folly”, i.e. a path that would lead to war.
Professor Crabtree cited four propositions that accounted for interest in the apparent comparability between events today and 100 years ago.
The first is that international tensions display some levels of similarity. That is, countries are involved in areas of disagreement over disputed territories, an apparent naval arms race is unfolding, nationalism is renascent, and new leaders seek to re-interpret international laws. 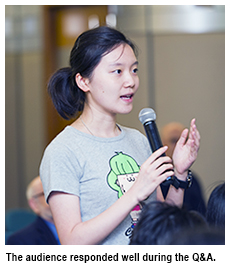 Secondly, the fundamental reality was that China was on the rise, he said, fueled by China’s view of the world through the “prism” of the “humiliation of history” and the “great resurgence of the Chinese people”. China saw itself as surrounded by unfriendly forces and was militarising in response, he said.
Thirdly, the US was on the decline, in relative terms, and regarded the world through a very different prism, one of “universal values” and “liberal internationalism”, a worldview that could set the US on course for a clash with mainland China. Washington, too, was building its military, and projections suggest that it was likely to increase its military presence in Asia over the next few years in a bid to protect its economic and diplomatic interests.
Fourthly, the US and China had to seek ways to de-escalate rising tensions, and pursue peace at all costs. A prime suggestion for higher education institutions, should they wish to play a role, was to establish greater levels of internationalisation on campuses through exchange agreements, for example, that would bring together students and faculty to collaborate on projects on the one level, and to immerse themselves in each other’s culture, at another.
“The rise of China is inevitable,” Professor Crabtree concluded. “But it should not be feared.” Greater understanding and tolerance would mitigate the rise of phenomenon such as nationalism and lay the groundwork for peace in the future, he said.