This year’s awardees of the CityU Outstanding Research Award are Professor Felipe Cucker of the Department of Mathematics and Professor Sun Dong of the Department of Mechanical and Biomedical Engineering.
The two scholars were unanimously chosen by a selection panel following a rigorous selection exercise. The Awards will be formally presented to the winners at the University Congregation in November 2014.
"I would like to congratulate both Professor Cucker and Professor Sun for the breakthroughs that they have made in knowledge creation," said Professor Way Kuo, University President. "They are great role models for everyone here at CityU." 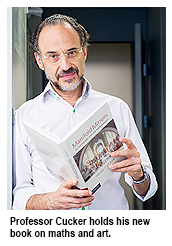 Professor Cucker has made seminal contributions to the mathematical modelling of flocks of birds. His work is now referred to as the Cucker-Smale Flocking model and has been followed by many researchers in mathematics, biology and engineering.
In 2011, Professor Cucker published a paper with Professor P. Bürgisser, with the title "On a problem posed by Steve Smale". This paper gives a partial solution to Smale’s 17th problem and is, as of today, the closest approach to a complete solution.
Professor Cucker’s work has useful real-world applications, such as control on unmanned vehicles and the management of multi-agent systems. 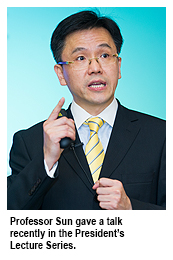 Professor Sun, who gave a talk in the President’s Lecture Series: Excellence in Academia last month, is best known for his work on biomedical robotics. His group is one of the first in the world carrying out successful robotic manipulation of cells.
The technology can have many applications to biomedical engineering, such as stem cell manipulation and investigation. Professor Sun’s work is especially significant as it helps to enhance CityU’s visibility internationally in the area of biomedical robotics.
Professor Sun has successfully led numerous research projects supported by many external grants which include two Collaborative Research Funds, 11 General Research Funds and seven Innovation and Technology Funds, as well as one theme-based research project as Co-Principal Investigator.