Creative media at City University of Hong Kong (CityU) goes from strength to strength with news of recent success in international competitions. 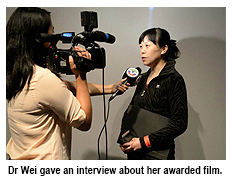 Dr Louisa Wei Shiyu, Associate Professor of the School of Creative Media (SCM), and Ms Chan Hau-chun, a recent SCM graduate, received awards at the DC Chinese Film Festival in the US and the Chinese Documentary Festival in Taiwan, respectively.

Aiming to promote the production of Chinese films and cultural exchange around the world, the festival shortlisted 54 finalists from eight countries and regions this year.

Dr Wei’s documentary depicts the production experience of Esther Eng, the first female Chinese-American director in the history of the US. Eng was active in the 1930s and 1940s in the US and Hong Kong. Critics said the subject matter, which crosses borders and connects industries, was an “eye-opener” and “compelling”. 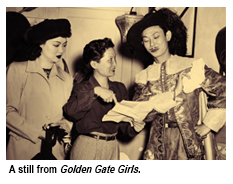 “When Eng was in the prime of her career, she produced a series of films about women, earning her the accolade as ‘the only female director of China’. In Golden Gate Girls, I tried to discover how Eng managed to accomplish so much in this special historical context that many female directors failed to do so in later years,” said Dr Wei, who has studied female directors for many years.

Dr Wei collected relevant materials for her film from all over the US, and is credited as screenwriter, cinematographer, editor, producer and the narrator of the documentary.

The film, which was finally completed in 2013, not only portrays the life and career of Eng, but also reveals insights into Sino-US relations at that time by incorporating the impact of major historical events such as the Chinese Exclusion Act, which was aimed at prohibiting the immigration of Chinese workers. 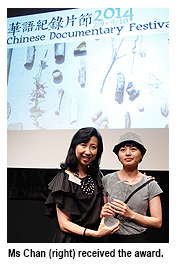 Meanwhile, the documentary 32+4 produced by Ms Chan won the Hong Kong Documentary Award at the Chinese Documentary Festival in Taiwan. This year, the festival received 190 entries, with 44 of them shortlisted as finalists.

It took about half year for Ms Chan to produce the 32-minute-long film. The director wanted to find a missing link in her family life. She had lived separately from her parents throughout her childhood. Filmed in the year of her graduation, the film shows Ms Chan asking her parents many questions about herself and about her relatives.

“The hardest part of making the film was to keep myself restrained since the interviewees were my relatives,” Ms Chan said. 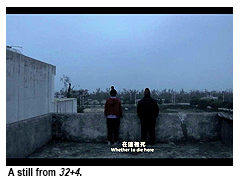 She was particularly grateful to former Associate Professor Mr Patrick Tam Ka-ming of SCM. “He introduced many good films for us to watch and study, enabling us to understand film aesthetics and film language,” she said. The documentary was supervised by Dr Wei.

“It is very encouraging to win the award. It allows me to explore more possibilities of expressing myself in images with confidence. It is a way of understanding myself and the world,” she added.

Both documentaries made their public screening earlier in Hong Kong.