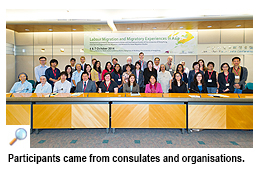 Scholars, consuls, and representatives of NGOs, international organisations and migrant groups discussed issues related to labour migrants in Asia at a symposium held at City University of Hong Kong (CityU) on 6 and 7 October.
The aim of the symposium, which was organised by the Department of Asian and International Studies (AIS) at CityU, the International Organization for Migration (IOM), and the Network for Asian Migration Studies (NAMS), was to provide a platform for migration scholars, researchers, migrant groups, NGOs, international organisations and policy-makers to exchange experiences and share views on labour migration issues in Asia. 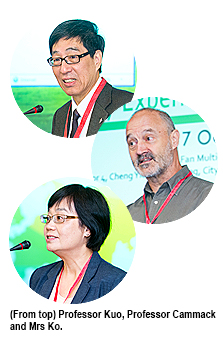 Speakers shared their research and views about labour migration policies and advocacy, migratory movements and trafficking, and migrants’ welfare and rights in the presentation session, followed by open discussions on these issues.
Professor Way Kuo, President of CityU, Professor Paul Cammack, Head of AIS, and Mrs Gloria Ko, Head of IOM Hong Kong, officiated at the opening of the event.
Professor Kuo thanked all the speakers for their contributions to the discussion on labour migration in Asia, pointing out that migration was growing quickly in the region.
Professor Cammack said that as Hong Kong was historically a migrant city, and was now a hub for migrants from Asia, it was pertinent to have the symposium held in Hong Kong.
“We are increasingly aware of the problems that migrants are facing. The discussions will bring recommendations for policy changes that promote migrants’ welfare and rights in Asia,” he said. 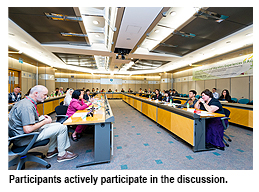 Among the attendees at the conference were Ms Bernardita Leonido Catalla, Consul-General of the Philippines, Mr Hoang Chi Trung, Consul-General of Vietnam, Mr Mohammad Sarwar Mahmood, Consul-General of Bangladesh, Ms Mirana Mahrukh, Consul of Bangladesh, Ms Pratana Udommongkolkul, Consul of Thailand, Mrs Wint Mon Htun, Consul of Myanmar, Mr Reda Manthovani, Consul (Legal) of Indonesia, Mr Justin A. King, Vice Consul of United States of America, Professor Michele Ford, the School of Languages and Cultures of The University of Sydney, Dr Xiang Biao, Lecturer of  the School of Anthropology and Museum Ethnography at the University of Oxford, Mr Asad Beg, Head of the Political, Press and Information Section of the European Union Office to Hong Kong and Macao, and Dr Chan Yuk-wah, Associate Professor of AIS.