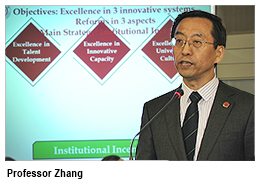 Innovative reforms initiated at Shanghai Jiao Tong University (SJTU) over the past decade have helped inspire an institutional incentives system that is invigorating campus at various levels, according to Professor Zhang Jie, President of SJTU, at a City University Distinguished Lecture on 11 September.
The aims of the reforms were to build three specific systems designed to transform SJTU into a world-class university by 2020 that would benefit China, the region and beyond. These systems are Excellence in Talent Development; Excellence in Innovative Capacity; and Excellence in University Culture.
In terms of talent development for academics, SJTU has spearheaded several reforms aimed at attracting world-class faculty, such as the transition to a tenure-track pathway for the long-term development of faculty.
“I believe the success of US universities in recent years has been the adoption of a tenure-track system that provides faculty with the incentive to innovate,” said Professor Zhang, who took over as President of SJTU in November 2006. 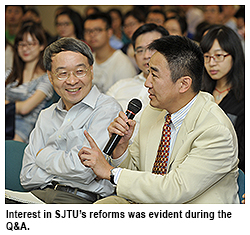 This example of an incentive mode demonstrated how SJTU was shifting focus from university central planning to personal development, and was also evident in student enrollment and nurturing, Professor Zhang said. For instance, reform measures were aimed at transitioning SJTU teaching and learning from a knowledge transfer mindset to the encouragement of knowledge exploration.
For the second desired system, Excellence in Innovative Capacity, SJTU terminated early on in Professor Zhang’s term as President anachronistic incentives for publishing papers in favour of publishing as a necessity for career progress. In addition, national benchmarking and assessments were introduced, while the number of disciplines was reduced from 68 to 53.
For the third incentive, Excellence in University Culture, Professor Zhang said the management mode at SJTU had been shifted from centralisation to de-centralisation, devolving greater powers to the school-level in the university in a bid to reduce bureaucracy and render the university more efficient. 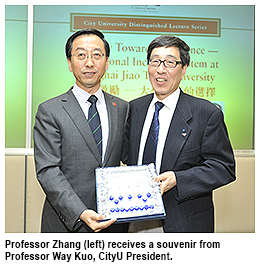 The impact of these reforms over the past eight years had been felt across the SJTU campus community, Professor Zhang said, citing increases in fiscal revenue, the amount of research funding that the university was attracting, and the number of SJTU disciplines rated in the top 1% of the Essential Science Indicators surveys.
The university was also able to hire world-class faculty from around the world, improve its performance in world ranking exercise and those on the mainland, send more students overseas, and perform strongly in national grant-awarding exercises.
“Our objective by 2020 is to build these three systems, so that we can achieve excellence in terms of talent development, innovation capacity and culture and spirit,” Professor Zhang said.
Professor Zhang was conferred a CityU Honorary Doctor of Science in 2009 for his outstanding research achievements in the field of physics and his contributions to pushing forward the development of higher education in China.