Math and stats in DNA sequencing 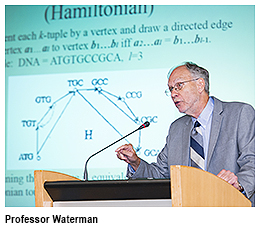 Genome analysis was the subject of the City University Distinguished Lecture on 8 September given by Professor Michael Waterman of the University of Southern California.
Professor Waterman, who holds an Endowed Associates Chair in Biological Sciences, Mathematics and Computer Science, discussed how “big data” from the next generation of DNA sequencing technologies has radically changed the techniques that were successfully used in the Human Genome Project (HGP) in 2002. The goal of HGP, he said, was to discover the sequence of the chemical base pairs that make up human DNA, and to identify and map all of the genes of the human genome.
Over the course of his career, Professor Waterman said sequencing techniques had been transformed dramatically by advances in technology, and he predicted that, with falling costs, we would see further improvements to the extent that general medical practitioners would soon be in a position to routinely read a patient’s DNA sequence.
“Every new technology can make extinct a set of computational methods,” he said after describing the painstaking methods scientists had to rely on thirty years ago. 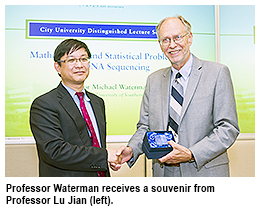 But there was a caveat to tech breakthroughs, he added. “Every new technology is likely to create a new suite of problems.”
Professor Waterman works in the area of computational biology and bioinformatics, concentrating on the creation and application of mathematics, statistics and computer science to molecular biology, particularly to DNA, RNA and protein sequence data.