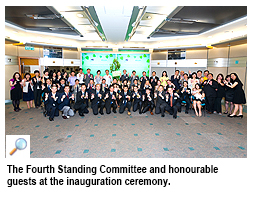 The inauguration ceremony of the Fourth Standing Committee of the Convocation was held on 18 July, extending the Convocation’s efforts to building lifelong bonds between alumni and the University.

Speaking at the ceremony, Mr Herman Hu Shao-ming, Council Chairman of City University of Hong Kong (CityU), expressed his gratitude to the Convocation.

"I would like to take this opportunity to extend my sincere thanks to the Third Standing Committee members who have demonstrated admirable efforts and commitment in serving the University and alumni in the past two years,” he said, adding that he had high hopes for the Fourth Standing Committee in the coming two years. 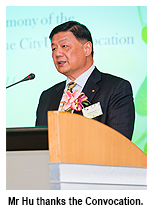 In addition, Mr Hu invited alumni to join the Homecoming Gala on 30 November this year. This event will be an opportunity for alumni to celebrate the University’s 30th anniversary amid an array of lively activities.

Professor Way Kuo, University President, joined Mr Hu in applauding the Convocation. “We are thankful for having such great alumni leaders who are so dedicated to supporting the University’s development,” he said.

In his remarks, Professor Kuo said some 140,000 graduates had been groomed by CityU over the past 30 years while CityU had evolved from a humble institution into a dynamic, internationally respected university. 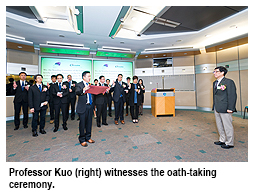 “The University would not be successful without the effort and contribution of alumni,” Professor Kuo said.

After the oath-taking led by Mr Clovis Lau Koong-yep, Chairman of the Fourth Standing Committee, the Tree Watering Ceremony was held, signifying the committee’s dedication to supporting CityU’s development. 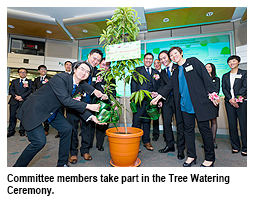 The Convocation is a statutory organisation established by the Council on 1 January 2007, creating a significant link between the University and its growing band of alumni. Its membership includes CityU graduates, Emeritus Professors and honorary award recipients. 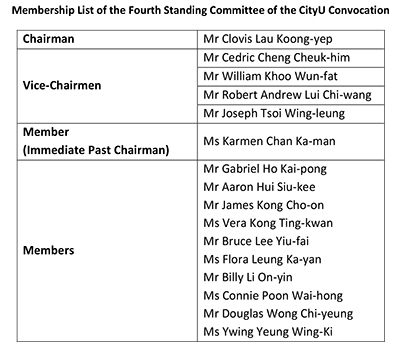