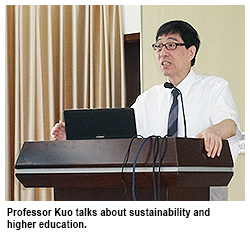 Water resources are of crucial value to sustainable growth, while “water” makes a pregnant metaphor that helps us understand sustainable higher education.

The conference held at Zhejiang University was attended by an international audience including more than 100 students from various countries. Delivered in English, the talk was spiced with a number of Chinese adages such as “Water can keep a boat afloat, but can also make it sink” (水能載舟, 亦能覆舟), referring to the two-way effects of the element, as it can both bring relief from droughts and cause floods.

Even the recent Fukushima nuclear disaster in Japan could be blamed on a fatal shortage of an adequate water supply that could have been used to cool down the melting nuclear fuel inside the reactors and saved the day, he suggested. 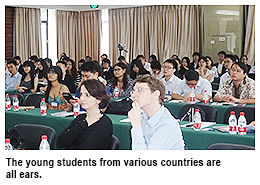 Yet a greater focus of his talk, as Professor Kuo said, was on the sustainability of higher education, particularly in China.

The first quiz question thrown at his audience was: Is the name of Zhejiang University, which ranks third in China’s higher education realm, a boon or a bane to its students?

It could be both, just like water, that could both help and harm, answered one of the students. Upon this, Professor Kuo pointed out that for a university to advance in a sustainable way, it must ensure that people can see talent in each of its students, as everyone is talented in a particular way.

Many successful people, like Bill Gates of Microsoft and Mark Zuckerberg of Facebook, don’t rely on the name of a prestigious university. They even quit as students because they knew that was the best road for them to choose, Professor Kuo said.

He grouped universities today into four types: 4-year liberal arts colleges like many of the Ivy League schools, professional universities like MIT, comprehensive ones like UC-Berkeley and Zhejiang University, and single-subject colleges like Juilliard School in the US and the many colleges in China that train athletes to win medals.

Whatever the type, he emphasised, a university’s purpose was for society to recognise students’ talents, while a good society should benefit from the strong human resources that a good education nurtures.

To succeed, he went on, a university should merge teaching and research, and help students to remain curious about issues related to environment, energy, and so on in addition to whatever subjects they specialise in.

A considerable part of the talk time was devoted to the Q&A session. This lively exchange between Professor Kuo and his young audience enabled him to re-emphasise a point in his talk: As people are all different, a certain type of higher education fits each type of students. 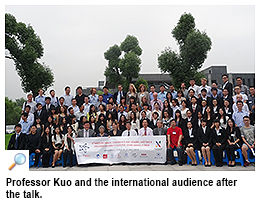 Ending his talk, he warned the audience, “Don’t trust everything I have said, but do research by yourselves to decide what is valid and what is not,” stressing the need for independent thinking.

In line with the talk, a presentation titled “Youth Speech: Innovation, Responsibility and Future” was held at the University later that evening. Professor Kuo delivered the opening remarks, and then acted as one of the moderators along with other academics.

Citing his own experiences and observations, Professor Kuo reminded the audience that, as history had shown, innovation itself changes with time, allowing no nation to always lead in science and technology, nor leaving any nation to lag behind forever.

He said he was greatly impressed by the talented young people at Zhejiang University and by China’s youth in general. “I see China is full of hope, as her young people are full of such fresh vitality, able to view history and other things in perspective,” he concluded.