Greater opportunities for in-depth collaboration were the focus of talks between the President of City University of Hong Kong (CityU) and Zhejiang University (ZJU) during a visit to ZJU on 19 May.
In their meeting, Professor Way Kuo and Professor Lin Jianhua, ZJU President, gave an update on the latest developments of their respective universities, in particular in the area of veterinary medicine in which both universities have consolidated partnerships recently with prestigious overseas institutions.
ZJU, which already has long-standing partnerships with CityU in the area of student exchanges, has established institutional agreements with the University of Alberta, Canada and Purdue University, US, while CityU continues to work closely with Cornell University, US. 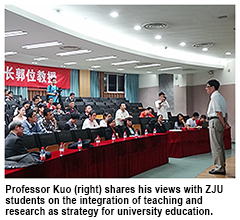