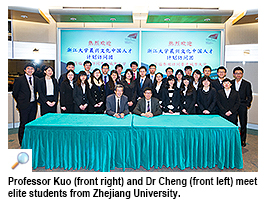 The President of City University of Hong Kong (CityU) emphasised the importance of the integration of teaching and research during a talk with more than 30 students from the Zhejiang University Morningside Cultural China Scholars (ZUMCCS) programme on 21 February.
During his talk titled “Development and Positioning of a University”, Professor Way Kuo said that developing a critical mind and creativity as well as showing the initiative to study were also very important.
Treating teaching and research as two unrelated subjects was a misconception, he noted, since the two are not mutually exclusive.
The reason the US had much more advanced technology than Greater China was that its universities integrated teaching and research, he added.
With research as a core responsibility, faculty members can only be a good teacher by being a good researcher.
Separating teaching and research could discourage students from developing a critical outlook, Professor Kuo argued, saying too many class hours in mainland universities deprived students of time for critical thinking.
Students should have time to explore problems from different perspectives and acquire useful knowledge, he said.
In his talk, Professor Kuo also emphasised the importance of overseas exchanges. He commended the ZUMCCS programme for providing opportunities for students to get such exposure.
Professor Kuo said he had committed CityU to increasing the number of student exchange programmes at CityU since he took over as President in 2008. He has proposed that over 50% of CityU students be given overseas experience during their studies. 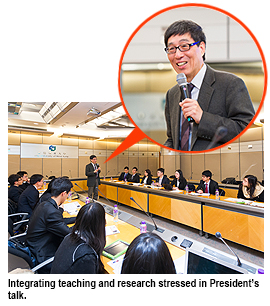 In the Q&A session, Professor Kuo offered his own observations about social leaders in response to questions raised by Zhejiang University students.
“Many successful persons and entrepreneurs join a lot of extra-curricular activities as students,” he said when asked what attributes a university student should possess in addition to a scientific mind.
“They deeply involve themselves in society and are highly curious about different social phenomena, which helps them acquire more knowledge beyond books, and ultimately leads them to develop a successful career,” he said, encouraging students to learn actively and maintain their curiosity.
Dr David Cheng Xing, CityU’s Associate Vice-President (Mainland and External Affairs), encouraged students to ask questions because Professor Kuo has aquired unique insights into higher education in Hong Kong since joining CityU six years ago.
The ZUMCCS programme nurtures future social leaders who are knowledgeable about Chinese culture and have a global vision. It invites eminent scholars and social leaders from China and overseas to host talks every year and helps students acquire greater international exposure with teachers and students at leading global universities and to have the chance to interview successful leaders.