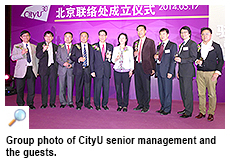 An opening ceremony hosted by City University of Hong Kong (CityU) in Beijing on 17 May marked the establishment of CityU’s Beijing Liaison Office. It was followed by two alumni dinners in Beijing and Hangzhou on 17 and 18 May to celebrate the 30th anniversary of CityU.
The new office is designed to strengthen ties with the mainland government, universities, science and technology institutions, enterprises, students and alumni. Its focus is to promote academic collaborations, enhance support for CityU students and staff in job seeking, exchanges, internships and research activities on the mainland, and coordinate alumni activities. 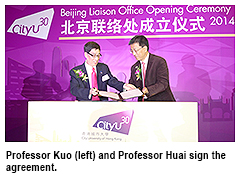 CityU has experienced dramatic growth in its research endeavours in mainland China. Research teams at the City University of Hong Kong Shenzhen Research Institute have been awarded RMB 87 million for funding 184 research projects in the past four years.
The Beijing Liaison Office is located on the campus of Beihang University. It is the second regional base for CityU’s endeavours on the mainland following the establishment of the Shanghai Liaison Office in Shanghai Jiao Tong University. An agreement on academic cooperation was signed by Professor Way Kuo, University President, and Professor Huai Jinpeng, President of Beihang University, during the event. 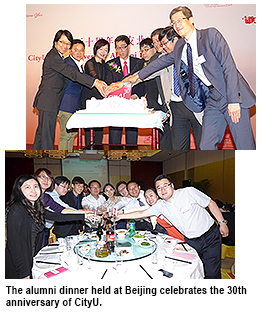 There were around 100 participants, among whom were CityU alumni and representatives from Tsinghua University, Peking University, Beijing Institute of Technology, Beijing University of Posts and Telecommunications, Nankai University, Tianjin University, University of Science and Technology Beijing, and Renmin University of China.
Mr Herman Hu Shao-ming, Council Chairman of CityU, was unable to attend the ceremony but sent a congratulatory message: “The Beijing Liaison Office signifies a new milestone in the University’s efforts to cooperate with universities on the mainland. I hope the office will help CityU and mainland universities draw on each other’s strengths to broaden and deepen cooperation for facilitating the social and economic development of Hong Kong and the mainland.”

Professor Huai said he appreciated how much CityU had achieved in just 30 years. “With the establishment of the Beijing Liaison Office, I hope CityU will have closer links with Beihang University and other universities in mainland China, and will have a brilliant future,” he said.
Professor Kuo introduced CityU’s new ranking and various cooperation projects with the mainland universities and organisations at the ceremony. “When I first came to mainland China in 1986, I visited Beihang University,” he said.
“Beijing is a crucial foothold for the development of CityU on the mainland. I hope that through our collaborations, we will make greater contributions to technology and education to benefit our society and the world,” he added.
Around 100 people including Professor Kuo, CityU senior management, staff and alumni gathered at the dinner titled “CityU 30th Anniversary Alumni Reunion@Beijing” after the ceremony. The alumni met old friends and caught up with the latest developments and achievement of  the University.

Shanghai Liaison Office will enhance cooperation with the mainland