The cultural dynamics of ageing

Increased longevity, particularly among people living in East Asian societies with special reference to Japanese society, combined with historically low birth rates in many nations, will impact all strata of society at social, economic and political levels, according to Professor Noriko Mizuta in her discussion of the cultural dynamics of the ageing society at a CityU Distinguished Lecture on 9 April at City University of Hong Kong (CityU). 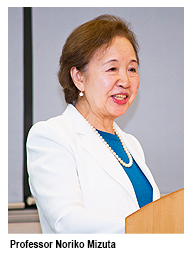 However, while it was important for governments to enact appropriate policies to prepare for and mitigate what some commentators have referred to as the “demographic time bomb”, it was equally essential that older people in society should not be treated as a homogenous block and that individual rights, aspirations and needs were acknowledged, Professor Mizuta said.
In her talk “The Yamamba’s Long Life: The Cultural Dynamics of the Aging Society", Professor Mizuta used the folklore surrounding the mythical Japanese mountain-dwellers called the Yamamba as a conceit for flexibility in referring to and embracing old age. The Yamamba, often cited as “mountain witches”, maintain an ambiguous position in Japanese thinking, explained Professor Mizuta, a specialist in comparative literature by training and the current Chancellor of Josai University Educational Corporation and now an Honorary Professor in CityU’s Department of Management.
While reportedly hateful of men, jealous of younger women and even eager adherents to a culinary culture of cannibalism, Professor Mizuta said the Yamamba were also diligent agricultural workers who would often descend from their mountain lairs to help villagers with the annual harvests and take care of the sick, before traipsing back to their craggy homes.
The cultural memory of these mythical mountain spirits is a useful means of framing Japanese society today, said Professor Mizuta. There are around 40,000 centenarians in Japan of whom 10 percent still work, chiefly raising crops on small holdings for their own consumption or to sell. According to data from Japan’s government, nearly 90 percent of these centenarians are women.
“Men do not have the power to survive!” joked Professor Mizuta, pointing out that down-and-outs who have fallen through Japan’s social welfare and family nets intended to safeguard the elderly are invariably men.
The ability of women in Japan to survive not only to a ripe old age but also to survive well contrasts starkly with what happens to men, Professor Mizuta said. While Japanese men are on average likely to live longer than men from other nations, they do not cope well without the support of women, she said. 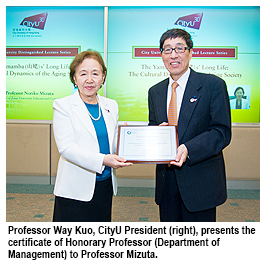 “Japanese men never have to take care of anyone,” she said, explaining how patriarchal traditions permeate the whole of Japanese society with men often spending only about one hour a week on average with their families and working notoriously long hours.
The logic of such a culture locates men in the workforce and women at home looking after the kids, the housework and extended family members, a situation that would not have appealed to most Yamamba.
Now, with the collective problems of longevity and fewer babies being born, the government had to seek ways to address time-honoured concepts of male and female roles in society, Professor Mizuta said.
For example, more workers were needed for health and welfare services in Japan because more people were living to an older age. But even though unemployment has risen among men in Japan in recent years and there is clearly the personnel available to fill vacancies for such services, Japanese men are “useless”, to quote Professor Mizuta, at looking after other people since there is no tradition of male nurses or care workers, and they are rarely pro-active looking after the kids and the home.
Can women take on these roles in the health and welfare sector? They can, but as Professor Mizuta explained, society did not encourage women to work, especially since they also had to produce babies now that the birth rate was so low.
Further inconsistencies revolve around the retirement age. Compared to other nations, the retirement age in Japan is fairly low with many workers forced to retire at 60 even though they cannot claim state welfare payments until they are 65, leaving an awkward five-year gap during which time retirees have to rely on savings or family, the latter becoming harder with the falling birth rate.
In addition, new government incentives to encourage couples to raise a family had placed the onus on women to quit work and stay home. Maternity leave, while well meaning, was a gender-based leverage that was preventing women from balancing careers and families, something which is taken for granted in societies such as Hong Kong.
Given these inconsistences, Professor Mizuta said government policy had to be flexible enough to embrace diversity and allow people to enjoy a broader and less restricted relationship with their communities, rather like the Yamamba did in the misty past.