Implanting artificial bones or teeth in human bodies may cause infection after surgery, which affects medical results. This problem is now being addressed with a new technology developed by a scientist at City University of Hong Kong (CityU).

Injecting antibacterial silver ions into the artificial parts for implantation with the plasma technology developed by Professor Paul Chu Kim-ho, Chair Professor in the Department of Physics and Materials Science, has been proven effective in laboratory tests. The silver ions kill Escherichia coli (E. coli) and Staphylococcus aureus (S. aureus), as well as two types of bacteria that cause periodontal disease. In addition, the release of silver ions can be controlled to prevent health problems for patients.
Due to its anti-corrosion and low rejection qualities, titanium is widely used in manufacturing artificial limbs, teeth and joints. Its one drawback, however, is that bacterial infection can readily occur after implantation. Currently, the solution to this problem is to apply an ultra-thin silver coating to the artificial parts. Yet even this is not sufficient as the silver will ultimately wear away after implantation, thereby lessening its long-term anti-bacterial effects. Silver can also be harmful due to its toxicity.
A more effective solution has now been discovered by a research team led by Professor Chu using nanotechnology to create tiny titania nanotubes on the surface of titanium in order to promote cell growth. Silver ions are then injected into the tubes, which will not affect the biophysical characteristics of the tubes.
To test the antibacterial properties of titania nanotubes containing silver ions, Professor Chu’s research team cultivated two common types of bacteria: E. coli and S. aureus. Both forms of bacteria are common in patients after implantation. Laboratory tests showed that titania nanotubes injected with silver ions killed almost all E. coli in the first 7 days, with a bactericidal rate as high as 99% in 28 days. Similar test results were achieved on S. aureus bacteria.
To further test the antibacterial effect of silver ions, the team cultivated two types of bacteria that cause periodontal disease: Porphyromonas gingivalis (Pg) and Actinobacillus actinomycetemcomitans (Aa). Laboratory tests showed that almost all of these two bacteria cultivated on titania nanotubes injected with silver ions died in one day, whereas a large number of bacteria survived on the nanotubes not treated by the plasma technology. Similar test results were produced after seven days, demonstrating that titania nanotubes injected with silver ions have a persistent antibacterial effect. 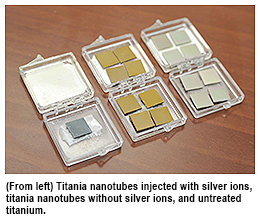 Laboratory tests also showed that titania nanotubes with silver ions are compatible with human cells and facilitate their growth rather than killing these cells.
“As there are numerous bacteria in our mouth, it is very important for the materials used for implanted teeth to have an antibacterial effect,” Professor Chu said. The literature reveals that implants are most easily infected in the first six hours after surgery. It is thus crucial for the implants to produce an antibacterial effect in the first day after surgery.
Plasma technology can be used to control the concentration and depth of silver ions injected in titania nanotubes. The deeper silver ions are injected, the slower the release rate of the ions and the longer the antibacterial effect. Even though a small amount of silver ions are released from the nanotubes, over the long run the method is safe for humans.
Titanium alloy with plasma technology developed by Professor Chu is already in wide use for manufacturing artificial joints, bones and teeth for human implants. These artificial parts can be further improved by making use of silver ion injections.
Having published over 1,000 academic papers, Professor Chu has become a respected scientist in the field of plasma science and materials engineering. Among his many accolades, he has been ranked a top 100 researcher worldwide and the number one researcher in Hong Kong by Thomson Reuters Web of Science, an academic journal database.
Professor Chu has also been honoured with the Shanghai Natural Science Award (First Class), Institute of Electrical and Electronics Engineers (IEEE)/Nuclear and Plasma Sciences Society Merit Award, and the Hong Kong Awards for Industry: Technology Achievement Certificate of Merit. He is a Fellow of the Materials Research Society, American Physical Society, American Vacuum Society, IEEE, and Hong Kong Institution of Engineers.
​

CityU scientist elected as Fellow of the Materials Research Society