CityU scientist elected as Fellow of the Materials Research Society

Professor Paul Chu Kim-ho, Chair Professor of Materials Engineering at City University of Hong Kong (CityU), has been elected as a Fellow of the Materials Research Society (MRS) based in the United States. This honour acknowledges his outstanding contributions to the development of plasma immersion ion implantation for modifying material surfaces, which has extensive industrial and biomedical applications.

The title of MRS Fellow has been given annually since 2008 for accomplishments made in materials science research. The Fellows are internationally-renowned scientists who are widely recognised by their peers. 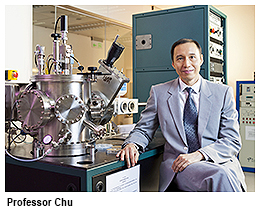 Professor Chu is the first scholar in Hong Kong and the fifth in the Greater China region to earn this highly prestigious honour. “CityU encourages academics to conduct applied research. I derive great satisfaction from transferring outcomes of my scientific research to society. This has motivated me to make further progress.”
Since joining CityU in 1996, Professor Chu has been committed to researching basic plasma theories and plasma implantation, as well as its applications for semiconductors and biomedical materials. He has developed a range of advanced technologies which help enhance the performance and quality of instruments and significantly reduce the toxicity of metal devices implanted in human bodies. The novel materials he has developed have been used in biomedical and microelectronics devices, industrial equipment, and aerospace components, with great economic and social benefits.
A torch-shape plasma generator, the latest research development by Professor Chu and his collaborators, produces ionised air containing oxygen and other oxidising agents that disinfects with ozone in much the same way as a bleaching agent. In the field, the generator can disinfect wounds, making it ideal for battlefield applications and other outdoor first aid situations. He has recently applied for a patent on a smaller, more portable version of his generator.
Professor Chu has also improved the surface characteristics of titanium alloy, artificial heart valves made from pyrolytic carbon and developed orthopaedic NiTi shaped memory alloys for correcting spinal deformities.
In addition, he has increased the durability of satellite parts, reducing wear and tear, and produced the first silicon-on-insulator (SOI) wafers by plasma implantation. SOI increases the operational speed of computer notebooks and mobile telephones by up to 30%. These innovations are now manufactured in both the US and mainland China. He has further indicated that he will continue his research on the application of plasma technology in materials used for solar cells and other energy-related materials.
Having published over 1,000 academic papers, Professor Chu has become a respected scientist in the field of plasma science and materials engineering. Among his many accolades, he has been ranked a top 100 researcher worldwide and the number one researcher in Hong Kong by ISI Thomson Scientific.
Professor Chu has also been honoured with the Shanghai Natural Science Award (First Class), Institute of Electrical and Electronics Engineers (IEEE)/Nuclear and Plasma Sciences Society Merit Award, and the Hong Kong Awards for Industry: Technology Achievement Certificate of Merit. He is a Fellow of the American Physical Society, American Vacuum Society, IEEE, and Hong Kong Institution of Engineer.