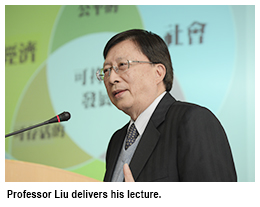 Rule-by-virtue (Wang Dao) was an essential component for advancing international relations for the twenty-first century, argued the former premier of Taiwan in the second City University Distinguished Lecture this week at City University of Hong Kong (CityU).
In his talk titled “The Rule-by-Virtue Century : The missing element for sustainable development” on 7 March, Dr Liu Chao Shiuan put forward a case for considering Wang Dao to be the missing element for sustainable development.
Although economic growth had been attained over the last 20 years in the region, the development of social justice had not necessarily grown exponentially, said the Taiwanese educator and politician, who served as Taiwan’s premier from May 2008 to September 2009 after a successfully career in academic. He is a former president of the National Tsing Hua University (1987–1993) and Soochow University (2004–2008).
Refuting the notion that he was trying to revive ancient Confucian ideology, Dr Liu suggested that benevolent, virtuous and contemplative rule was crucial to sustaining the development of societies, to be included with the three dimensions of sustainable development: a strong economy, a positive attitude to environmental protection and social justice. 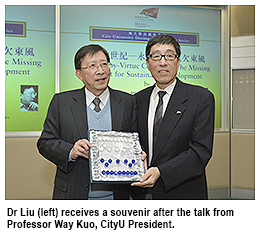 Rule-by-virtue welcomed diversity of viewpoints and allowed for the concept that no system was perfect, said Liu, who has coauthored with his brothers novels about ancient Chinese martial arts.
Those leading liberal capitalist democracies needed to pay greater heed to distributing wealth more fairly, welfare, and the impact of the Gini co-efficient on societies, he said, and had to consider how they rule, internally and externally. For instance, the mainland Chinese government was authoritarian in terms of its domestic agenda but contributed significantly to UN peace-keeping operations around the globe. In contrast, the US was regarded by some nations as warlike in terms of its foreign policy but fair and democratic internally.
“You can still see many people queuing outside US embassies around the world trying to get work or student visas for the US,” he said.
With reference to the delicate state of regional geo-political relations involving especially mainland China, Dr Liu suggested the need for a think-tank, perhaps one that is privately funded, and one that would give participants time and space to talk, without a set agenda, but rather with the caveat that all previous disputes would be put aside.
“We all want a better future; who wants polarisation?” he said towards the end of this talk. “And we need to talk about substantial issues.”
In his welcoming address, Professor Way Kuo, University President, and a former student at National Tsing Hua University, reminded the audience how some East Asian nations lost faith in their own culture during the period of rapid modernisation at the end of the nineteenth and start of the twentieth centuries, but that the rule-by-virtue concept offered an opportunity for integration of diverse ideas, bridging the gaps between Western and Eastern political thought and philosophy.