​16% of the children in Hong Kong have anxiety levels above the normal cut-off, and slightly higher than the percentage reported in studies in other countries, according to a recent study at City University of Hong Kong (CityU).
The study has also found that parenting styles affect children’s anxiety levels, suggesting that parents should nurture children’s character strengths in order to decrease their chances of developing anxiety symptoms in the future. 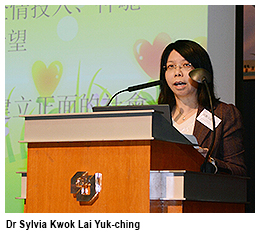 The results come from the Happy Seeds Nurturance Project organised by Dr Sylvia Kwok Lai Yuk-ching, Associate Professor in the Department of Applied Social Studies at CityU, and co-organised by the Chinese Rhenish Church Hong Kong Synod with sponsorship from the Quality Education Fund, from February 2013 to January 2014.
During this period, CityU conducted a questionnaire survey and interviewed parents of 368 children aged 3 to 6. The aim was to understand the impact of different discipline methods on children’s character strengths and mental health.
About half the children were randomly selected to join 16 sessions of small-group positive psychology activities designed for developing character strength. They were then compared to children not participating in the activities for an evaluation of the effectiveness of these activities. This project also included teacher workshops, parent workshops, and school-based programmes.
The survey revealed that 16% of the children had anxiety levels above the normal cut-off, and slightly higher than the percentage reported in studies in other countries.
The percentage of children affected by anxiety symptoms was found to be slightly higher in boys (17.3%) than in girls (16.2%). Girls were found to have significantly higher scores in hope and altruism than boys; first-born children scored significantly higher in anxiety than non-first-born children; while children in single-parent families were found to report significantly more anxiety symptoms than children in intact families. With higher scores in altruism, honesty, and forgiveness, the anxiety levels in the children were found to be lower, and vice versa.
The result also revealed that different discipline methods have different impacts on children’s character strengths and mental health. With more frequent use of “teaching” as a discipline method (e.g. demonstrating to the child what appropriate behaviours are), the children were found to have higher levels of hope, gratitude, altruism, and honesty.
With more frequent use of “restorative behaviour” (e.g. request for compensation if the child has done something wrong), the children were found to have higher levels of hope, altruism, creativity, bravery, and sympathy.
On the other hand, if the parents use more “ignorance of misbehaviour” as a discipline method (e.g. take no action when the child has done something wrong), the children were found to have lower levels of gratitude, honesty, and forgiveness, as well as higher levels of anxiety.
Finally, if the parents use more “psychological aggression” (e.g. make their children feel guilty or ashamed), the children were found to have lower levels of altruism and forgiveness, and higher levels of anxiety.
A strong connection was found between reported levels of anxiety symptoms and the discipline methods of the parents. Dr Kwok said parents had to pay more attention to the children’s emotions, to abstain from placing too much expectation or pressure on their children, to encourage their children to be honest, be willing to help others, and to forgive others’ wrong-doing.
Dr Kwok recommended that applying “teaching” and “restorative behaviour” more frequently can enhance their children’s character strengths; while the use of “ignorance of misbehaviour” and “psychological aggression” may have adverse effects on the children and increase their anxiety.
Contrary to beliefs among many of the parents, psychological aggression may do more harm to their children’s mental health than physical aggression.

Apart from studying anxiety problems among children in Hong Kong, and the relationship between parenting style and children’s anxiety levels, Dr Kwok hoped to facilitate the awareness of character strengths in children, to enhance their self-value, and to let the children experience subjective happiness from character strengths development through a series of small-group positive psychology activities.
These activities comprised 16 sessions (45-minute each) covering the eight character strengths in the project, including creativity, hope, love and beloved, altruism, gratitude, bravery, honesty, and forgiveness.
They were held for the participating children aged 3 to 6 in Kindergarten Grade 2 to develop their character strengths. Evaluation found that the small-group activities were effective in enhancing forgiveness in the participating children.
Mrs Hsieh, the mother of a student from Lai King Rhenish Nursery, shared her experience after her daughter joined the project. She said her daughter was now more willing to face challenges and approach novel things. For example, although she enjoyed playing on the beach, she never dared to swim in the water in the past because she was afraid that the sea water would get into her eyes. Very recently, the family had an occasion to go the beach. With the encouragement of her father, she finally took her first step into the water.
“I can sense that my daughter is becoming braver in this mere occasion,” she said.
Mrs Hsieh said she had gained a lot from the project as well. It had made her reflect on how positive her attitudes were when she was interacting with her daughter. The eight character strengths highlighted in the project has also enhanced her awareness that parents’ behaviour can have a strong impact on a child. As a mother, she has to encourage and praise her child more frequently, which she believes will positively impact her daughter’s development.
Mrs Cheung, another mother of a student from Lai King Rhenish Nursery, also shared her feelings. She said her son used to be introvert, but he became more active in class, creative and more willing to care about other classmates after joining the project. For example, he started to use drawing to express his ideas and feelings.