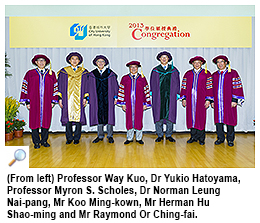 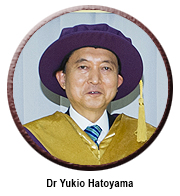 Dr Hatoyama ran for a seat in Hokkaidō's 9th district and was first elected to the House of Representatives in 1986, representing the ruling Liberal Democratic Party. In 1993 he left the Liberal Democratic Party to co-form New Party Sakigake. He then started the newly-formed Democratic Party of Japan in 1996, and served as its President from September 1999 to December 2002, and from May 2009 to June 2010. He led the party to victory in the 2009 general election, defeating the long-governing Liberal Democratic Party. After his membership of the House of Representatives ended in November 2012, he established the East Asian Community Institute in 2013. Dr Hatoyama holds a BS of Engineering from the University of Tokyo and a PhD in Engineering in Stanford University.
Mr Koo Ming-kown, founder of Nam Tai Electronics, Inc, received an Honorary Doctor of Social Science. His company has gone from strength to strength since it was founded in 1975, and it is now a listed company on the New York Stock Exchange. Mr Koo has served Nam Tai in various senior executive and management positions and is now the Executive Chairman and Chief Financial Officer. 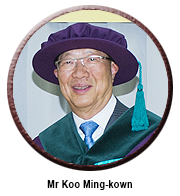 As a philanthropic industrialist, Mr Koo has supported the development of education in Hong Kong for many years by making significant donations to the higher education sector and schools. He is also actively involved in charitable matters. Over the years, he has personally made donations to charities on the mainland, in Southeast Asia, Canada and the US. Mr Koo received his Bachelor of Laws degree from National Taiwan University in 1970.
Professor Myron S. Scholes, Frank E. Buck Professor of Finance, Emeritus, at the Stanford University Graduate School of Business, received an Honorary Doctor of Letters. He has been Emeritus since 1996, and was called back to active duty in 2010. He is Chairman of the Board of Economic Advisors of Stamos Capital Partners. He is the former Chairman of Platinum Grove Asset Management (retired at end of 2009), which he co-founded in 1999. 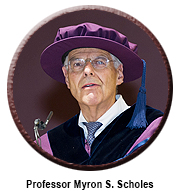 Professor Scholes is widely known for his seminal work in options pricing, capital market equilibrium, tax policies and the financial services industry. He has published widely in academic journals. He is the co-originator of the Black-Scholes options pricing model, which is the basis of the pricing and risk-management technology that is used to value and to manage the risk of options contained in instruments around the world. For his work on “a new theory to value derivatives”, he was awarded the Nobel Prize in Economic Sciences in 1997.
In addressing the graduates in his note of thanks, Professor Scholes thanked CityU for the honour. He said, “Persistence means that even if we fail, we learn from our failure along the way to our goals. We applaud success, but we also applaud failures that lead to success. Great academics are persistent and willing to fail in an attempt to succeed. Research and development are never easy. The great researchers ‘search’ for new ideas that break the tyranny of the ‘data mining’, and build new models and gain new insights from the information set. This is the crucial difference between the successful and unsuccessful hunters.”
Mr Herman Hu Shao-ming, Council Chairman, Mr Raymond Or Ching-fai, Deputy Council Chairman and Professor Way Kuo, President, also attended the ceremony.
In his speech, Professor Kuo encouraged graduates to seek ways to challenge themselves and get more overseas exposure. “My dream is for each and every one of you to carry the flame of discovery and innovation into society and seek ways to be unique, be original and to be challenged. The easy path is often the less rewarding,” he said. “When you are overseas, you need to use different languages, adapt to different customs and work within a variety of social structures. All of that experience will be invaluable when you return to Hong Kong and to the job market. Employers are calling out for recruits who can work in multicultural, multilingual work environments.”
Kwok Pui-yee, Bachelor of Engineering (Honours) in Total Quality Engineering, represented the graduates. “All the struggles and challenges were tiring but they made us grow even stronger. These ups and downs have been the most valuable treasures that we discovered at the University, and they will lead us forward with great confidence,” she said.